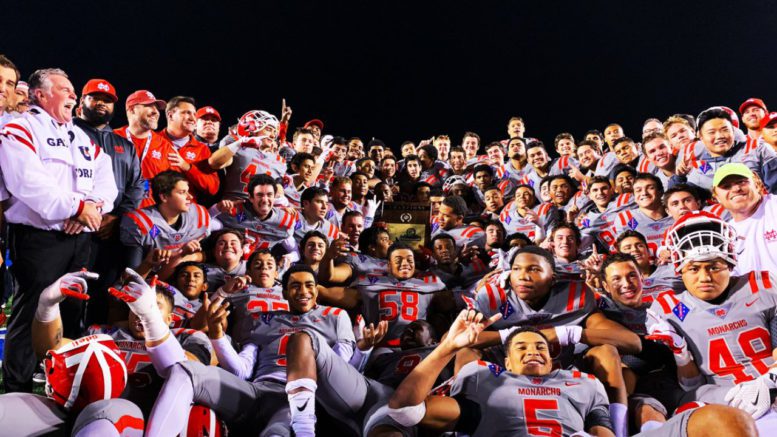 I’ve been writing this a lot this year, it’s very difficult for a high school football team to beat the same team twice in the same year. Friday night, top-ranked St. John Bosco wasn’t able to do-the-double this year, losing to No. 3 Mater Dei in the CIF Southern Section Division 1 final. The Monarchs 17-13 victory before 10,569 fans avenges a 41-18 loss to the Braves in mid-December.

SJB got out to a 7-0 lead on the first drive of the game on a 19-yard TD pass from DJ Uiagalelei to Jude Wolfe, but it was the only touchdown of the night for the Braves high-powered offense.

Mater Dei, who has now won back-to-back CIF-SS Division 1 titles, took the lead for good in the third quarter when Bryce Young connected with Bru McCoy.

The Mater Dei defense held Bosco to only 202 yards in total offense. Uiagalelei was held to just seven completions in 19 attempts. The junior threw for 105 yards with one touchdown pass with two interceptions.

The victory advances the defending national champs into the California Open Division championship where it will meet the winner of the northern championship game. De La Salle will face the winner of Saturday’s game between Clayton Valley and Liberty.

For the 11th time, @MDFootball is the @CIFSS Champion! pic.twitter.com/nnnQdNowIm