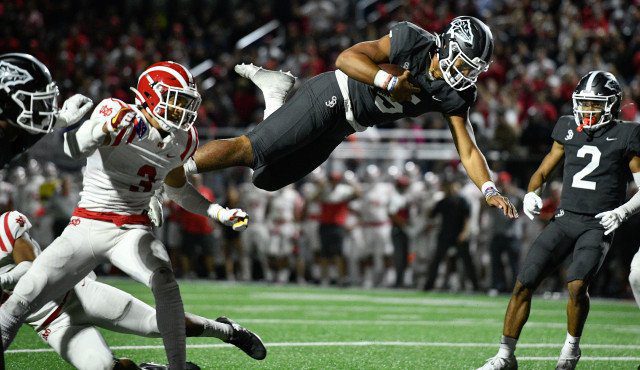 If you read the headline and think No. 3 St. John Bosco beating No. 1 Mater Dei isn’t a stunner, you’re probably right. But, if you consider that at one point Saturday night, the two-time defending High School Football America national champs led SJB 28-5 in the CIF Southern Section Division 1 championship, then you might agree that “stuns” is an appropriate word in the headline.

What everyone will agree upon is these two Southern California schools are heavyweights, not only in SoCal, but also in the nation. Consider this fact — since 2017, no team other than Mater Dei or St. John Bosco has sat on-top of the High School Football America 100.

Saturday night at Cerritos College, most thought that Mater Dei was well on its way to another national title with a 28-5 lead in the first half. The reason for that feeling may have been the fact that the Monarchs were a perfect 12-0 against what many considered, including High School Football America, the toughest schedule in America in 2019.

However, nobody ever asked the Braves if they thought the game was over.

Behind 5-star quarterback D.J. Uiagalelei with 9,993 fans watching, Bosco stormed back with 34 unanswered points to take a 39-28 lead with 8:52 to go in the game. The Clemson-recruit finished the night with 444 yards and five touchdowns.

What a second half this guy led his team through.

Huge congratulations to @DJUiagalelei, the final and surely well-deserved GP Player of the Game, and every one of his teammates on such an incredible W!@boscofootball | #PrepZone pic.twitter.com/UoGGy6mmkm

Mater Dei closed the gap to 39-34 with about five minutes to play. It then came down to the final play of the game as Alabama-commit Bryce Young tried a Hail May pass that was picked-off by in the end zone to seal the victory that avenged Mater Dei’s 38-24 Trinity League victory in late October.

Later today, see if the victory is enough to push St. John Bosco to the top of the High School Football America 100 national rankings.

Mater Dei’s season ends with a 12-1 record, while Bosco improves to 12-1 with a matchup looming in two weeks against No. 10 De La Salle in the state’s Open Division championship.