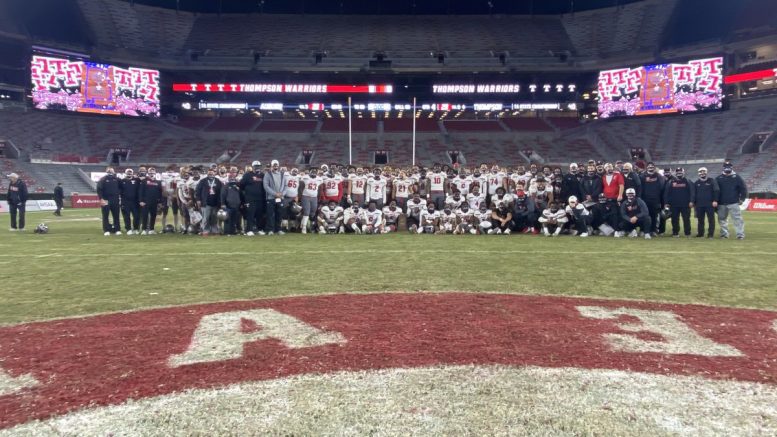 To quote Yogi Berra, “it ain’t over ’till it’s over.” The Thompson High School football teams believes that saying more than ever after its incredible 29-28 come-from-behind, last second win over Auburn in the Alabama 7A championship game Friday night at the University of Alabama’s Bryant-Denny Stadium.

Auburn, No. 97 in the High School Football America 100 national high school football rankings powered by BlackMP Living Water, led the defending champs 28-19 with :18 second to play. Forced to punt from the Auburn 44, Thompson’s Korbyn Williams’ blocked a Tiger punt and raced into the end zone to cut the Auburn lead to 28-26.

It then came down to Thompson executing an onside kick, which it did.

Two pass interference penalties against Auburn moved the ball to the Tiger 18 with just four seconds left. It was then up to kicker Trevor Hardy.

Thompson 29, Auburn 28 Final. Hardy with the 35-yard game winning field goal as time expires. Thompson with the miracle finish for the 7A State Championship. Unbelievable!@WARRIORNATION20 pic.twitter.com/UBMQQq7f6j

Thompson’s win came with junior quarterback Conner Harrell on the sideline due to a first half injury. The Warriors, currently ranked No. 3 in the nation, finish a perfect 14-0, while Auburn ends with an 11-2 record.