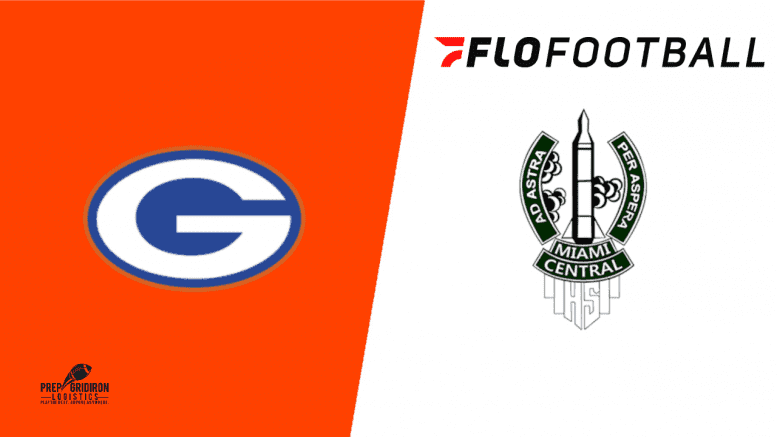 When Miami Central and Bishop Gorman get together, high school football fans get to watch two of the best in the nation, year-in and year-out. Both teams love to test themselves against out-of-state opponents.

Saturday night, in Naples, Florida at the Battle at the Beach, the Rockets and Gaels will meet for the first time since 2017 when MC beat BC 24-20 in Las Vegas. In ’17, Bishop Gorman was No. 7 in our national rankings, while Miami Central was No. 34.

You can watch tonight’s game LIVE on FloFootball.com at 8 PM Eastern.

The Rockets, who lost their season opener two weeks ago in Southern California to No. 6 St. John Bosco, enter the game as the highest ranked of the two teams. Miami checks-in at No. 30. Gorman is ranked No. 55 in the High School Football America 100 powered by NFL Play Football after its season-opening win over Hawaii-power Saint Louis.

“We always try to get the team battle-tested throughout the season, so we play a daunting schedule year-in and year-out,” said Miami Central head coach Roland Smith, who was the High School Football America/NHSCA National Coach of the Year in 2015.

Bishop Gorman has been a beast out of Nevada for more than a decade, winning 11 state championships in Class 4A, the state’s largest classification. The Gaels were our national champs in 2016.

There’s plenty of talent on both sides of the ball to watch in this one.

The Rockets will need a strong defense to stop Bishop Gorman senior running back Cam Barfield, who’s given his verbal to Boston College. Barfield scored five touchdowns in the season-opening win over Saint Louis.

Defensively, the Gaels also have plenty of players that will play at the next level. Three of the top four players in the state, according to the 247Sports.com Composite Rankings, play for BG. Safety Zion Branch is considered the No. 1 prospect in the state. He has 43 offers.

Joining Branch in the secondary is Fabian Ross, who has given his verbal to USC. Another next-level player is EDGE rusher Cyrus Moss, a 3-star prospect and the No. 2 overall recruit in Nevada.