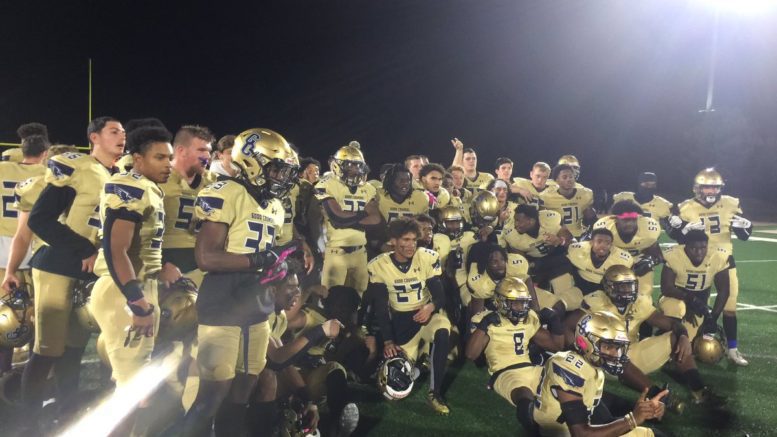 The Washington Catholic Athletic Conference regular season is off to its usual “on any given week” start. Friday night, No. 33 Good Counsel (Maryland) edged No. 7 Gonzaga (Washington, DC) 42-35 in five overtimes in the WCAC opener for both teams.

After battling to a 7-7 tie at the end of regulation, the Eagles and Falcons went to work on an instant classic between the two teams ranked highly in the High School Football America 100 national rankings.

The game itself was billed as the Good Counsel defense, which entered the game allowing only 71 points in its first six games (31 coming against No. 2 St. John Bosco), against Gonzaga’s outstanding junior quarterback Caleb Williams, who holds 23 scholarship offers from around the country, including Alabama, Clemson, Georgia, LSU, Ohio State and Penn State.

The other Williams, on the field, was Good Counsel QB Chase Williams, who had an outstanding overtime, running for two scores and passing for another. Running back Sy’Veon Wilkerson caught the TD pass and it was his touchdown run (below) that turned out to be the game-winner.

Gonzaga scored all four of its overtime touchdowns on the strength of Williams’ arm. But, then it came down to the play below that sealed the victory for the Falcons.

.@KrisJenkinsJr1 breaks up the pass and @gcfootball COMPLETES THE UPSET in OT 5!

Because there are no “off weeks” in the WCAC, next week, Good Counsel squares-off against No. 65 St. John’s College (Washington, DC), which has played one of the toughest schedules in the nation and Gonzaga faces No. 18 DeMatha, which is idle this week.

Both teams now own 6-1 overall records and await the release of Sunday’s new High School Football America 100 to see how Friday night’s classic affects our proprietary algorithm. And, don’t forget, there’s a good chance that we could see a rematch between these two when the WCAC playoffs begin in November.