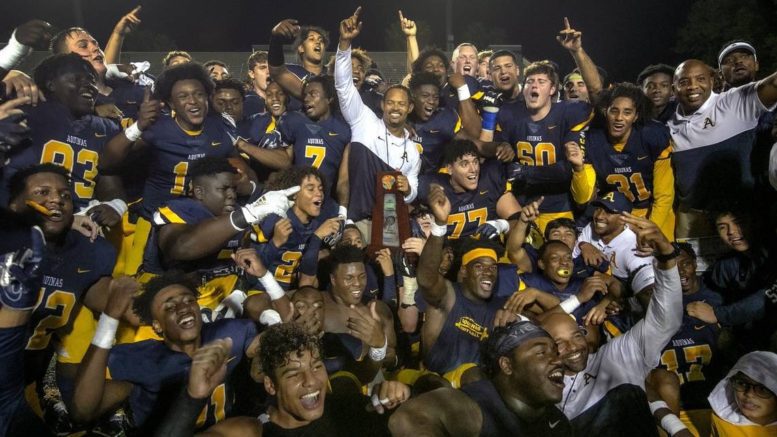 St. Thomas Aquinas, ranked No. 4 in the High School Football America 100, is still in the hunt for our 2019 “mythical” national championship. Saturday night, the Raiders survived a last second challenge by No. 58 Edgewater to capture Florida’s 7A state championship with a 28-23 win over Edgewater.

The game came down to the final play that you can watch below.

Read a game recap from our friend Josh Wilson at FloridaHSFootball.com below.

DAYTONA BEACH, Fla. — A year ago, the St. Thomas Aquinas Raiders were standing on the turf of Camping World Stadium in Orlando, accepting the runner-up trophy after a 33-20 loss to Lakeland in the 7A state championship game.

Saturday night, at Daytona Stadium, redemption came for the Raiders. But they had to work for it, holding off Orlando Edgewater on the final play of the game to win the 7A state title 28-23.

It’s the 11th state title for St. Thomas Aquinas, tying the Raiders with Jacksonville Bolles for the most championships in FHSAA Football Finals history.

Edgewater (13-2) trailed 28-17 after St. Thomas Aquinas quarterback Zion Thomas found Marcus Rosemy for an 11-yard touchdown with 6:04 left. It looked like the Raiders were pulling away, after trailing by as much as 14-0 in the second quarter.

But the Eagles responded with a 6 play, 76-yard drive capped off by a 26-yard touchdown pass from Canaan Mobley to Tommi Hill. Edgewater tried a fake extra point but the two-point attempt failed, and the St. Thomas Aquinas lead stayed at 28-23 with 4:18 to go.

Edgewater then forced a Raiders’ three-and-out and got the ball back on their own 16-yard line with 2:05 left. The Eagles moved down the field to the St. Thomas Aquinas 23-yard line with four seconds left. Mobley tried to hit Hill again in the right corner of the end zone, but Rosemy cut in front of the receiver for the interception to clinch the state title for Aquinas.

Edgewater used two long drives to get out to an early lead. The Eagles moved 99 yards in six plays on their opening drive, with going 54 yards to the end zone for a 7-0 lead with 8:33 left in the opening quarter.

Edgewater stopped St. Thomas Aquinas on fourth down at the Eagle 2-yard line early in the second quarter. Edgewater then drove 98 yards as Leary dashed 75 yards to paydirt for a 14-0 Edgewater lead.

The Raiders finally got on the board on the next possession, as Anthony Hankerson ran 63 yards for a touchdown to draw St. Thomas Aquinas within 14-7. Edgewater held onto that lead into the halftime break.

Edgewater continued to lead until the Raiders Blaine Anderson intercepted Mobley at the Aquinas 44-yard line halfway through the third quarter. Turner then rushed 13 yards for his first touchdown and the game was tied at 14-all.

After a short Edgewater punt, Turner rushed for another 13 yard score and St. Thomas Aquinas led for the first time at 21-14 at the end of the third quarter.

Then the wild fourth quarter happened.

Hankerson rushed for 190 yards on 27 carries and a touchdown, with Turner running for 75 yards and the two scores for St. Thomas Aquinas, who finishes as the only unbeaten high school football team in Florida this season at 14-0.

Leary rushed for 141 yards on only six carries, and Isiah Connelly added 140 yards on 28 carries. Connelly had 157 carries in five games in the postseason, breaking the record of former Alabama and current Tennessee Titans running back Derrick Henry.

No. 30 Venice captures Florida 7A title by beating No. 89 Bartram Trail