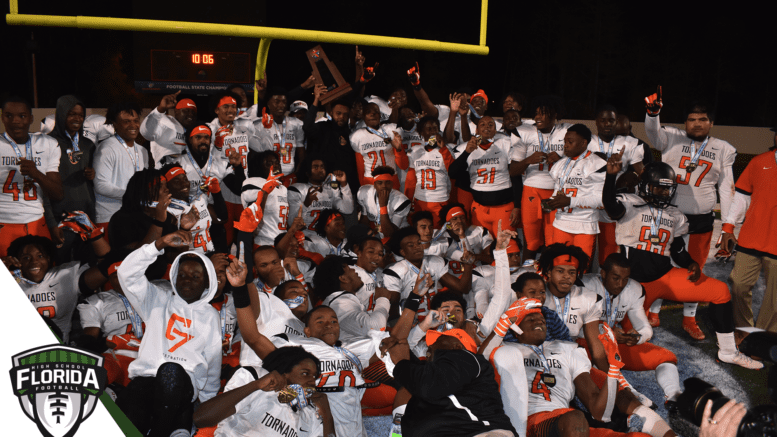 Below, read a game recap from our friends at FloridaHSFootball.com.

DAYTONA BEACH, Fla. — For 42 and a half minutes on Wednesday night the Bolles Bulldogs looked like they were on their way to extending their record to 12 state championships at Daytona Stadium.

But a high school football game is 48 minutes long and in those last five and a half minutes Booker T. Washington rallied for two touchdowns to rally past Bolles 25-21 to capture the 4A state title for the sixth time overall and fifth time in the last eight years.

Bolles scored on the opening drive and led the entire game, but Booker T. Washington put 15 points on the board in a two and a half minute span late in the fourth quarter to beat Bolles for the fourth consecutive time in a state championship game.

Booker T. Washington (13-2) trailed 21-10 at halftime and still was down by the same margin when quarterback Torey Morrison hit wide receiver Jacorey Brooks in the right corner of the end zone for a four-yard touchdown pass and the Tornadoes were back within 21-16.  Morrison then hit Adam Moore for two points and suddenly Booker T. Washington was within three points.

Then on the ensuing Bulldogs drive, Booker T. Washington got the biggest break of the game, as linebacker John Joachin fell on a fumble by Bolles quarterback Ben Netting at the Bulldogs 30 yard line.  Bolles forced a 4th-and-18 but Booker T. Washington’s Edward Arza made a fantastic leaping catch for 23 yards to the Bulldogs 15-yard line.  Morrison ran into the end zone on a quarterback keeper on the next play, and with 2:50 left the Tornadoes had the lead for the first time all night.

Booker T. Washington’s defense then forced Bolles to turn the ball over on downs on the ensuing drive, and that was that for the most recent Tornadoes state title.

Bolles went right down the field and scored on the opening drive of the game, as sophomore wide receiver Kade Frew picked up a Davis Ellis fumble and rumbled into the end zone from nine yards out to give the Bulldogs a 7-0 lead.

Booker T. Washington went right down the field on their first offensive possession to tie the game up at 7 as Morrison found Brooks for a 22-yard score.

But back came Bolles, as Frew scored his second touchdown of the game, turning a screen pass from quarterback Ben Netting into a 24-yard touchdown.

The Tornadoes got back on the board on a field goal from 23 yards for Jose Mejia, and Booker T. Washington was back within 14-10 with 9 minutes and 14 seconds left before halftime.

But Bolles again answered with Frew’s third touchdown of the first half. Frew caught another short pass from Netting and turned it into a 46-yard score.  With the extra point, Bolles extended the lead to 21-10 halfway through the second quarter.

Unfortunately for the Bulldogs, they wouldn’t score again. And no points were scored for the next 23 minutes of game time before Booker T. Washington scored the deciding points late in the fourth quarter on a windy and drizzly night in Daytona Beach.

Morrison finished 27-of-42 passing for 275 yards and two touchdowns with one interception for the Tornadoes. Morrison also rushed for 53 yards and another score on 19 carries. Brooks caught a game-high 13 catches for 94 yards and the two scores.

Bolles, who advanced to the state championship game in the first season under coach Matt Toblin, was led by Frew, who had three catches for 84 yards along with his three touchdowns. Netting threw for 119 yards and three scores and also rushed for 53 more yards on the ground.

Booker T. Washington dominated the stats, outgaining Bolles 377-177 while running 30 more plays than the Bulldogs.  Despite those numbers, two turnovers and 14 penalties for 149 yards kept the Tornadoes from taking control.

But Booker T. Washington’s offense finally found just enough momentum to get into the end zone twice late in the fourth quarter and sent another state football title back to Miami-Dade County.

As for associate head coach Ben Hanks who has been the primary leader for the Tornadoes this season, he had this to say about his team’s performance as well as Bolles’ performance.

“Bolles came out with a great game plan. It was a strategy to keep our offense off the field. In the beginning, for some reason we started off slow, I think that has been our motto for us throughout the playoffs. With those kids, I will go to war with them at any time. They made some plays at the end, when you don’t think you can and that is how it became our victory,” Hanks said.