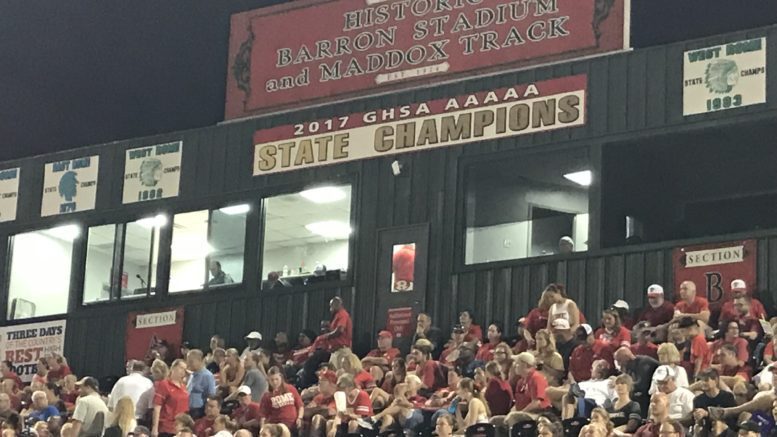 In a game that started Thursday night and ended early Friday morning, two-time defending Georgia state champ Rome defeated Marietta 51-41 in a battle between two teams in the Preseason 100. Rome, which extended its win streak to 28 straight, entered the game ranked No. 50, while Marietta checked-in at No. 57.

The game was the second part of a doubleheader for the season-opening Corky Kell Classic and didn’t start until a little after 9 P.M. Eastern Time. Because of plenty of points, passing and penalties, the game ended just before 1 A.M.

With two of the state’s top quarterbacks at the helm, this had all the makings of a high-scoring affair and Rome’s Knox Kadum and Marietta’s Harrison Bailey didn’t disappoint.

Marietta scored on its first drive to take a 7-0 nothing lead, but then Rome reeled-off 21 unanswered points.

Kadum’s passing was balanced with a great performance by Jamious Griffin, a NC State recruit, who ran for 162 yards and three scores. Griffin also caught a touchdown pass.

Tennessee recruit Ramel Keyton caught 14 of Bailey passes for 191 yards and four touchdowns, while 5-star recruit Arik Gilbert also had 14 grabs for 170 yards and a score.

A Harrison Bailey heave & catch as time expired in half 37-21 pic.twitter.com/6R4GMUYXv2

Rome will be idle next week, while Marietta will play nationally-ranked Good Counsel from Maryland. The Falcons are ranked No. 7 in our Preseason 100.

*All of our football highlights are shot on my iPhone 8.