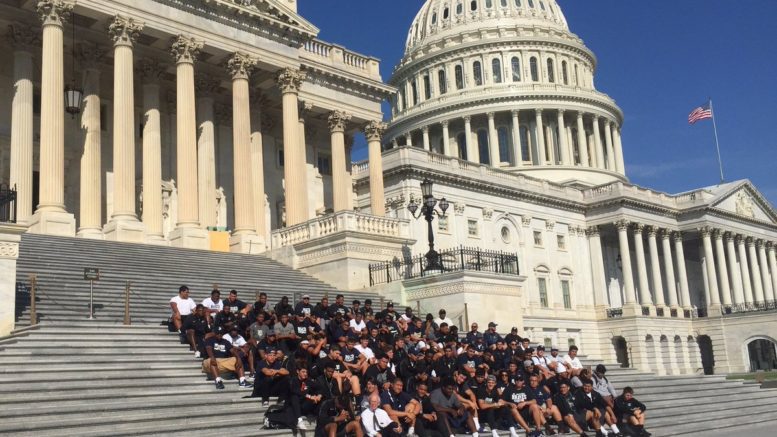 St. John Bosco at the Capitol in Washington DC. Twitter photo from @BoscoFootball

St. John Bosco (Bellflower, California) head coach Jason Negro has built the Braves into a national power since taking-over the program in 2010, but the teacher in him really comes-out when he takes his players on the road for big national match-ups.  Negro, who is a Bosco alum and a math teacher by trade, loves the national stage for his players, but he also wants to make sure they learn more than just about the opponent they’re going to face.

This week, SJB, ranked No. 6 in the latest High School Football America Top 100 national rankings, is in Washington, D.C. where the Braves will face No. 17 St. John’s College High School.  Negro, his staff and players arrived in the nation’s capital on Wednesday morning after taking a red-eye after a Tuesday afternoon practice on campus.

Negro and his Director of Football Operations Jessie Christensen have put together a busy schedule that includes practice for the Battle of St. John’s, plus lots of educational opportunities throughout D.C.

As of this morning, according to Christensen, the Braves had already been to the White House, had a picture on the steps of the Capitol, visited the Korean, Vietnam, World War II memorials, checked-out the Martin Luther King and Washington monuments, plus toured the National Archives and Arlington National Cemetery.

I thought it would be fun for readers to see there’s more to these big cross-country trips than just football.  Below you can see some of the pics on Bosco’s Twitter feed.

“I have a Dream…..”. Martin Luther King Jr. Memorial. pic.twitter.com/XmV8Nvzo6c

Some @boscofootball players listening to a homeless Vietnam Vet, the boys were locked & focused on his every word. Again great experience pic.twitter.com/xCWWmUGk2Q

Tomb of the Unknown Soldier at the Arlington National Cemetery. Watching Changing of the Guard is a must see. 🇺🇸 pic.twitter.com/bouiNs4yPi

One of the coolest pics from our trip. LB Spencer Gilbert gets the credit. Such a powerful moment for our young men. 🇺🇸 pic.twitter.com/GHwsSvgDJh

This is St. John Bosco’s second cross-country trip this year. The Braves opened the season on national television against St. Aquinas in Fort Lauderdale, Florida. The Braves dropped that one 9-3 in overtime.