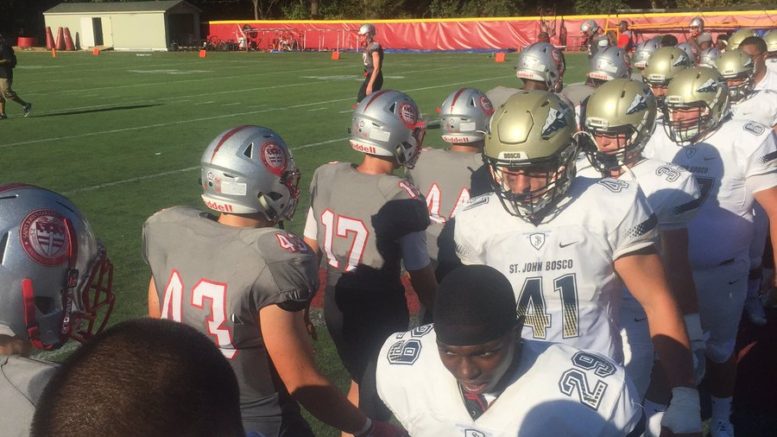 There’s been a ton of hype around St. John Bosco (Bellflower, California) sophomore quarterback DJ Uiagelelei, who has ten college scholarship offers even though he’s yet to start a varsity game.  That hype will ramp-up now, since on Saturday Uiagelelei came-off the bench and led the Braves to two touchdowns that gave the No. 6 ranked team in the High School Football America Top 100 a come-from-behind 21-17 win over St. John’s College High School in Washington, D.C.

Uiagelelei entered the game with his team trailing 17-7 and suffering from interceptions thrown by Iowa State-recruit Re-al Mitchell on back-to-back drives.  Uiagelelei completed 5-of-8 passes for 83 yards and a touchdown.

Short TD run by @boscofootball George Holani gives them the 21-17 lead over @SJCGridiron with 1:59 left pic.twitter.com/kXXytdjnJF

.@boscofootball makes it a 3 point game! 5:34 left in the fourth. What a beautiful play. Perfect execution. pic.twitter.com/ouni4NTmrq