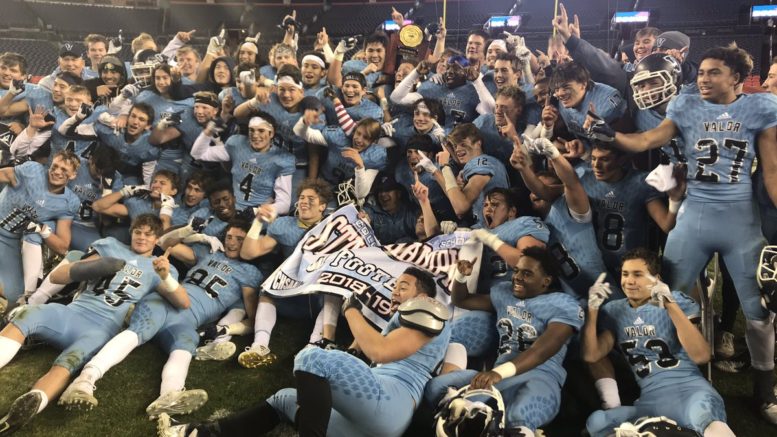 Valor Christian, ranked No. 75 in the latest High School Football America 100 national rankings, captured the Colorado Class 5A high school football state championship with a 24-14 victory over Cherry Creek Saturday. The title is the eighth in the last ten years for the Eagles, who won their first under first-year head coach Ed McCaffrey, whose son Luke led the charge as the team’s quarterback.

Winning state championships is not a new thing for Valor Christian’s football team, but Saturday’s accomplishment may have meant just a little bit more.

The Eagles captured their eight state title in 10 years on Saturday – their fifth in Class 5A – with a hard-fought 24-14 victory over Cherry Creek at Broncos Stadium at Mile High. Valor Christian capped off an undefeated season and gained a measure of revenge in the process – the Bruins were the only team to defeat the Eagles in a championship game back in 2014.

“We were underestimated a little bit throughout the whole season. To finally be able to play the guy that they were saying is the top dog was something really special,” said Valor senior quarterback Luke McCaffrey, who finished with 169 yards passing and a touchdown and also rushed for 68 yards. “It’s something we used as motivation week in and week out, and we finally got to show it.”

Jack Howell rushed for 79 yards and scored two touchdowns for Valor Christian (14-0) in the first half, including a 39-yard run early in the second quarter.

Howell took the ball through the left side and sprinted up the sideline for the score.

“There was a hole as big as a truck,” Howell said. “It opened up and I just saw it and hit it. Our line was blocking great out there.”

The sophomore spent much of the year at wide receiver, but made the switch to running back given Valor’s injuries at the position.

“The last few weeks we’ve had some injuries and he’s been playing halfback,” McCaffrey said. “He comes out here and has two touchdowns and rushes all over the place.”

The Eagles were just as tough on defense. Valor Christian sacked Cherry Creek’s Alex Padilla six times – including three on the final drive of the game – and Roger Rosengarten had a crucial interception late in the third quarter.

McCaffrey had just put the Eagles up 21-8 with a perfectly-placed throw that dropped over the shoulder and into the hands of Chase Lopez from eight yards out. The Bruins responded with their best drive to that point, moving 54 yards in only five plays.

Padilla had a pass tipped at the line though, and the 6-foot-7 Rosengarten snared it at the Eagles’ 24. That led to an 11-play drive that went into the fourth quarter, with Brian Brogan kicking a 32-yard field goal to make it a 16-point game.

“He definitely changed the course of this entire game, by allowing the offense to get back on the field,” said Valor senior defensive lineman Cian Quiroga, who had three sacks. “He’s just such a great athlete, we love having him.”

The teams traded punts, and a bad snap on Valor Christian’s attempt was recovered at its own 18. One play later Padilla found Vance Brazile for a touchdown, but the Eagles denied the two-point conversion to keep the score 24-14.

Valor Christian was able to run some time off the clock, and with Cherry Creek forced to pass, the Eagles’ defensive line sacked Padilla three times – twice by Quiroga – to run out the clock.

“Being a senior, for me this is a big deal – never coming to a state championship before,” Quiroga said. “Being able to make plays out here on the field with my brothers is the biggest thing to me.”

Padilla was 13-of-19 for 103 yards and a touchdown, and Brazile caught four passes for 56 yards. Seamus Henderson and Jayle Stacks combined for 122 yards on the ground for Cherry Creek (12-2). Henderson scored on a two-yard run late in the second quarter, and kicker Mac Willis recovered a bad snap and ran the ball in for the two-point conversion.

“We were willing to play whoever it was, because we wanted to play the best,” Howell said. “Whenever we can play a team like Creek – hats off to them, they’re a great team – but when we come together something crazy can happen.”

“That’s the best experience,” Luke McCaffrey said. “That’s one of the best moments of my life.”