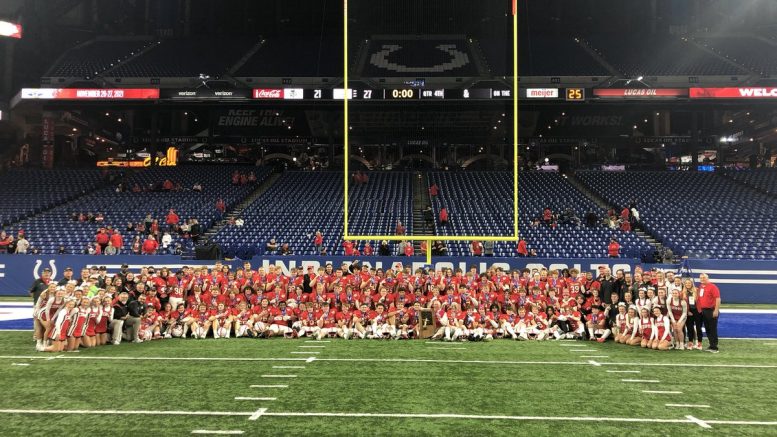 Center Grove needed a defensive stand deep inside their own territory to capture its second straight Indiana Class 6A state championship Saturday night at Lucas Oil Stadium, home of the Indianapolis Colts.

The Trojans, ranked No. 8 in the High School Football America 100 national rankings, powered by NFL Play Football, led No. 93 Westfield 27-21 with under two minutes to play. With Westfield driving, CG sophomore Owen Bright intercepted a Shamrock pass at the Trojan 3-yard line to seal the win.

A year ago, the Trojans beat the Shamrocks, 38-14, in the title game, but this one proved much more difficult. Center Grove trailed, 14-13, midway through the second quarter after a 25-yard run by Westfield senior Micah Hauser.

Center Grove came back before halftime and scored on a 30-yard pass from Tayven Jackson to Harrison Stomps, then appeared to take a commanding lead by returning the opening kickoff of the second half for a touchdown. The return, however, was nullified by a penalty. Jackson did, however, guide the Trojans on a 12-play, 80-yard drive culminated by a Micah Coyle 5-yard run to put Center Grove up, 27-14.

Westfield, coached by Jake Gilbert, a 2021 Colts Coach of the Week, kept CG at bay the rest of the way. Meanwhile, the Shamrocks offense cut the lead to 27-21 after a Hauser 1-yard run with 3:42 left in the third.

Westfield senior quarterback Maximus Webster, who finished with 357 yards in total offense, engineered a drive that reached the Center Grove 11 before Bright stepped in and picked off Webster’s third-down pass near the goal line with 1:37 left.

Academically, Strahm has earned a 4.06 GPA and anticipates graduating with an Academic Honors diploma next spring. He is involved in numerous school and community organizations.

Will has also excelled on the football field as a team captain and a starter on the offensive line helping the Rocks to two straight championship games. He was named an Academic All-State performer and was chosen by the Indiana Football Coaches Association as a member of the inaugural Good Works Team for his commitment to community service. He has also been a team captain for the school’s rugby team and participated in track and field.

Will is the son of Erica Strahm of Westfield, IN and will attend the University of Notre Dame to study Finance next fall.

The Indianapolis Colts, the presenting sponsor of the IHSAA state tournament, presented a $1,000 scholarship to Westfield High School’s general scholarship fund in the name of Will Strahm.

Defending 6A champ Carmel begins 2020 as the No. 1 team in the High School Football America Indiana 100