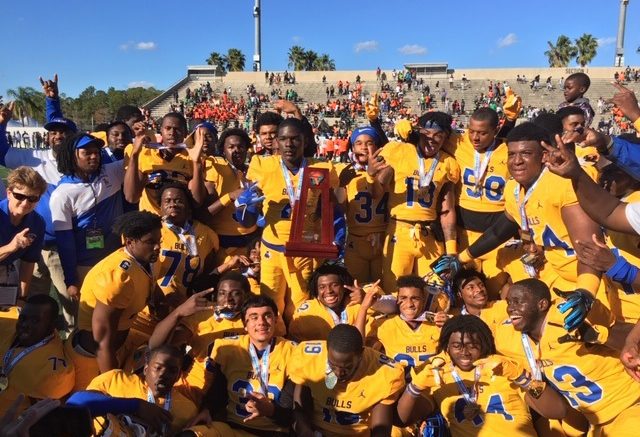 For the third straight year, Miami Northwestern, ranked No. 9 in the High School Football America 100 national rankings, can call itself state champs. Saturday, the Bulls beat No. 98 Jones 34-17 to win the state’s 5A championship game, which gives them a three-peat.

Below is a game wrap-up from Josh Wilson, founder of FloridaHSFootball.com.

DAYTONA BEACH, Fla. – For the Bulls of Miami Northwestern, the atmosphere to clinch the program’s third consecutive state championship and seventh overall in school history made it one to remember.

With a near-sellout crowd of over 10,000 fans at Daytona Stadium, both Miami Northwestern (13-2) and Jones (13-2) not only brought the fans, but they also brought the atmosphere sought by the FHSAA for a state championship game, that favored the Bulls in the end, 34-17.

And for the first half, both teams found ways to keep up with each other.

It all started with Jones taking the opening kickoff and putting together a nine-play 79-yard drive that was aided through a 61-yard carries by Avarius Sparrow on a long third-down play from their own 23-yard line that set up Sparrow’s two-yard touchdown run that allowed the Tigers take an early 7-0 lead with 7:19 left in the first quarter.

However, Jones thought they had their finger on the game early forcing the Bulls to punt but saw the ball fall out of the hands of Mendez Jean-Baptiste which was scooped up by Romello Brinson at the Tigers 19 giving the Bulls new life.

As such, it didn’t take much for the Bulls to capitalize on the turnover as Nathaniel Noel took it in from six yards out to tie the game up at 7-7 with 4:05 left in the first quarter.

The next score would come early in the second quarter when the Bulls took seven plays to complete a 66-yard drive that completed with a 17-yard pass from Taron Dickens to Marcus Fleming to put the Bulls up for the first time in the game, 14-7.

The lead wouldn’t hold long for as Jones responded back with their own 66-yard drive capped off by Sparrow’s six-yard rush to put the score 14-14 with 7:15 in the first half.

After that, there wasn’t much going for the rest of the first half as both Jones and Miami Northwestern kept things in check leaving the score tied up at the half.

In the second half, Northwestern took their opening drive down the field on a 61-yard drive that was capped off by Noel’s second touchdown of the game on an eight-yard carry that put the Bulls up 21-7 with 6:57 left in the third quarter.

Jones would turnaround and put another drive together that would be a nine-play, 64-yard drive that ended in a 27-yard field goal from Jeffery Saint to cut the score to 21-17 in favor of the Bulls.

At that point though, things came to a crashing halt as Miami Northwestern took their next two drives in the fourth quarter with the first one capped of by Noel’s third rushing touchdown of the game from one yard out while Dickens threw his second touchdown of the game to Brinson from seven yards out to put the score at 34-17.

With the state championship coming home once again for the Bulls, Head Coach Max Edwards has done something no other Miami Northwestern coach has been able to do by winning three straight state championships during the runs that the Bulls have had over the years.

And Edwards was impressed with the overall atmosphere in Daytona.

As for his history-making win? Edwards was feeling awesome.

“It feels awesome because nobody has done in history. My staff is the first to do it. It is big for the community, big for the kids. It is awesome,” Edwards.

No. 11 Northwestern shocked by Norland in South Florida

A relatively calm week in Top 100