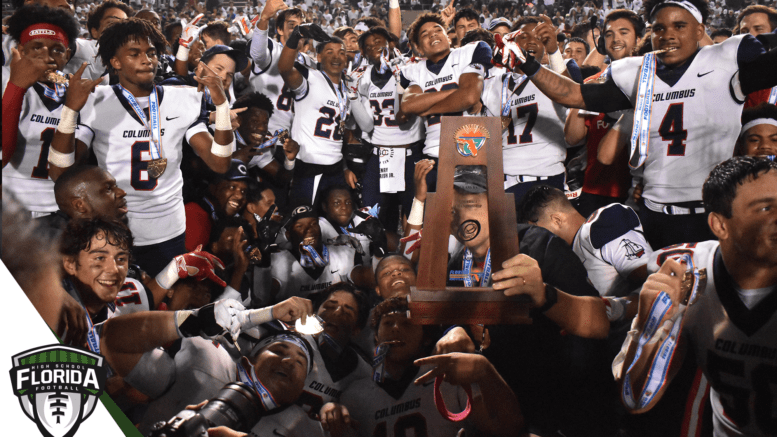 Columbus captured its first-ever Florida high school football championship with an incredible 21-20 comeback against Apopka. Columbus entered the game ranked No. 91 in the High School Football America 100 national rankings, while Apopka entered at No. 115.

Below, you can read a game recap from our friends at FloridaHSFootball.com.

DAYTONA BEACH, Fla. — A year ago, the Miami Columbus Explorers came up two points short of their first state football title, as Carson Beck and Jacksonville Mandarin held off the Explorers 37-35 in the Class 8A State Championship Game at Camping World Stadium in Orlando.

However, this time around the Explorers flipped the script on Apopka, scoring two touchdowns in the final 3:25 to stun the Blue Darters 21-20 and win the Class 8A state title at Daytona Stadium on Friday night.

Columbus (11-4) trailed the entire game and were still down 20-7 when Brandon McDuffey hit Henry Parrish with a 15 yard TD pass with 3:21 left. Apopka blocked the extra point, and Columbus still trailed 20-13.

But the Explorers forced an Apopka punt and took over at their own 28-yard line with 1:57 left.

McDuffey then led Columbus on a drive that Explorers fans will remember for years to come.

11 plays later, McDuffey hit Parrish again, this time from 6 yards out for another TD. Columbus trailed 20-19 with 8 seconds left, and Explorers coach David Dunn had a decision to make.
Dunn never had a doubt. He went for the win, and McDuffey hit Jahvar McSween on the two-point conversion attempt. And just like that, history for Columbus and heartbreak for Apopka.

It’s the first state football title for Columbus, as they won in their fifth championship game appearance. The Explorers were playing in their third championship game in six years, including a 30-23 loss to the Blue Darters in 2014.

McDuffey was the hero, completing 34-of-47 passes for 275 yards and two touchdowns. Parrish, who rushed for over 2,300 yards this season and just won the inaugural Nat Moore Trophy for best player in South Florida, was held to only 24 yards rushing on 10 carries. But Parrish caught 11 balls for 53 yards and the two touchdowns. Xzavier Henderson led the Explorers in yards receiving with 105 on eight receptions and also had a touchdown on the ground.

Apopka got on the board first after taking over on the Columbus nine-yard line after a very short punt. Quarterback Jaquan Lowman scored from three yards out and Apopka led 7-0 late in the first quarter.

Columbus answered back, with Henderson scoring from two yards out to even the score at 7-all in the opening minute of the second quarter.

Apopka came right back, as on the ensuing drive Lowman completed his only pass of the game for a 29 yard TD pass to Jalen Williams and the Blue Darters were up 14-7. That was the score going into halftime.

Apopka scored the only points of the third quarter, as Tramar Jackson scored from 10 yards out with 9:21 left. Apopka missed the extra point, but the lead was 20-7 and stayed that way until the fateful fourth quarter.

Apopka (12-2), who was searching for its fourth state title, instead finishes as a runner-up for the second time. The Blue Darters, who have always been a run-first team, rushed for 306 yards. Lowman, who was only 1-for-3 passing, had 24 carries for 249 yards to lead Apopka.

Apopka also held the ball for seven more minutes than Columbus. But in the end, it wasn’t quite enough for the Blue Darters.

And it was a total joy for the Columbus Explorers, who finally got a break from the football gods.