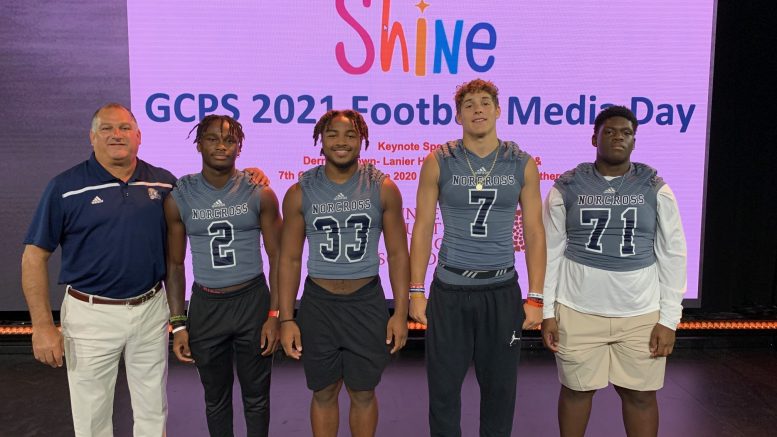 Norcross head coach Keith Maloof is in a familiar position heading into the 2021 Georgia high school football season. Maloof will have to replace nearly 40 seniors from last year’s team that finished No. 33 in the final 2020-21 High School Football America 100 powered by NFL Play Football, the NFL’s initiative to provide fun and engaging experience for players of all ages and skill levels.

Earlier this week at the 2nd annual Gwinnett County Media Day, Maloof, who has led the Blue Devils since 1999, talked about what it takes to reload after a 13-1 season that saw Norcross advance to the 7A state semifinals, losing to eventual state champ Grayson.

You can watch his interview with High School Football America co-founder Jeff Fisher below.

Linebacker Zakye Barker will be the leader of the defense. The 3-star linebacker has given his verbal to East Carolina after a junior season that saw him make 155 tackles with 37 for loss. He also had eight sacks.

Maloof has to rebuild a decimated offensive line.

Look for 4-star H-back Luckie Lawson’s star to grow. The junior-to-be was second on the team in catches last year. He caught 35 balls for 389 yards with three touchdowns.

The 2012 state championship team was led by current New Orleans Saints running back Alvin Kamara. During that season, which was during his senior year, he ran for 2,264 yards with 26 touchdowns. He also caught 22 passes for 286 yards and five touchdowns.

Kamara is one of eight former Blue Devils to play on Sunday. Wide receiver Isaiah McKoy, who was signed as an undrafted free agent by the Pittsburgh Steelers after the 2021 NFL Draft, will make it nine if he makes the team’s regular season roster.

Geremy Davis, wide receiver – Drafted by the New York Giants in 2015. Also played with the San Diego/Los Angeles Chargers. In 2020, he was released by the Detroit Lions.

Max Garcia, offensive lineman – currently with the Arizona Cardinals after being drafted by the Denver Broncos.

Alvin Kamara, running back – currently with the New Orleans Saints

Grayson moves to No. 1 in the High School Football America Georgia Top 25