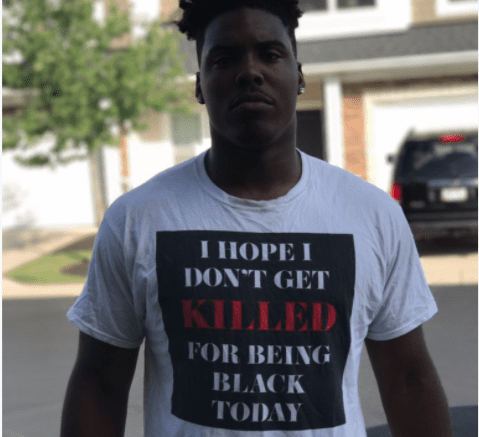 Tyreke Smith wanted to make a statement when he took part in Ohio State’s camp this week, but not necessarily on the field.

Ranked as the No. 4 weakside defensive tackle in the Class of 2018 and with 37 college offers reported, Smith made his statement with his shirt.

It read: “I hope I don’t get killed for being black today.”

“I decided to wear the shirt because I wanted to bring attention to the epidemic of blacks being killed at an alarming rate,” Smith told ElevenWarriors, a site that covers Ohio State. “What we would like to do is have people talk about these issues to reduce the murder rate of African-Americans.”

While Smith is from Cleveland Heights, he said the shirt was not a specific reference to Tamir Rice, the 12-year-old who was shot by a Cleveland police officer.

While the response has been positive, Smith has received negative reactions. Smith handled those with more maturity than you might expect from a teenager.

“[They] are speaking negatively because they don’t understand what’s going on and the message behind it,” Tyreke told Eleven Warriors. “To see or hear about so many senseless killings, it tends to have a negative impact on you. You start to wonder if we should move away… but most, ‘why?’”

He also understood with reporters, coaches and 100 players at the camp, he was likely to be photographed and the shirt would get attention. The shirt was created by his older brother, Malik, and is available for purchase via Twitter direct message.

“I felt I should wear it because I’m big on the African American culture and know the struggles that our race goes through,” Tyreke told Cleveland.com. “Whether people think that being black isn’t a task or not. Being the individual I am and the spotlight I have, I felt that people would get the message if I wore the shirt. Because if I’m being real, people are looking at me even when I don’t know and I knew they would see the shirt.”

As more people see the message, Tyreke has been thanking supporters on social media.

FloridaHSFootball.com’s Josh Wilson talks about the start of the regular season in Florida