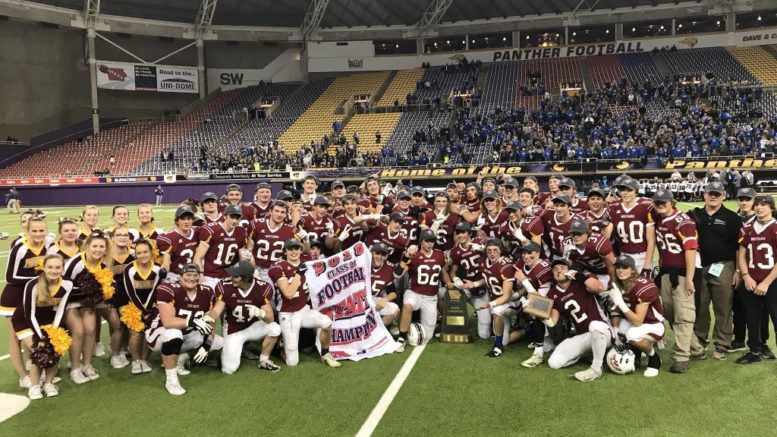 CEDAR FALLS, Iowa – PCM, Monroe was out to claim its first championship from the opening whistle of Friday’s Class 2A title game.

After forcing an interception on Boyden-Hull/Rock Valley in the first minute, and tossing a 55-yard touchdown off a flea-flicker on their first offensive play, the Mustangs (13-0) made their intentions clear. And they never let up in a dominant 28-7 victory at the UNI-Dome.

“We’ve had good, good football teams in the past,” senior Preston VanWyk told the media after the win, “but we finally got to a championship game and we won it. It is just so awesome.”

VanWyk caught that flea-flicker from quarterback Reed Worth, streaking down the left sideline like he would routinely against the Nighthawks (11-2) on Friday afternoon. Worth finished with 262 yards passing and three touchdowns, with four passes totaling 129 yards going to VanWyk.

More impressive than those timely deep passes or even the 129 rushing yards and touchdown from PCM senior Wes Cummings was the top-ranked team’s defense. When Boyden-Hull/Rock Valley finally got the ball away from the Mustangs, it struggled to produce consistently.

“Their defense was just so tough on us,” BHRV coach Cory Brandt said. “We struggled. They gave us a full scheme, came prepared, so hats off to their staff because they did a great job. Our kids battled, but they won up front and they forced us to be one-dimensional.”

The Nighthawks went into halftime with -3 rushing yards and finished the game just 13-of-32 passing with four interceptions. Outside of scoring on a short drive in the third quarter – J.T. Van’t Hul found Cody Post for a 28-yard touchdown pass – that cut PCM’s lead to 13-7, BHRV struggled to move forward.

“This is just an unreal experience,” said PCM senior defensive back Payton Strovers who intercepted two passes in the win. “I played the best I could and the rest of the guys did the same and we came out with the ‘W.’”

PCM held the ball for nearly 32 minutes in the 48-minute contest. Coach Greg Bonnett’s program was playing in its first title game and ended its two games at the UNI-Dome by allowing just seven points.