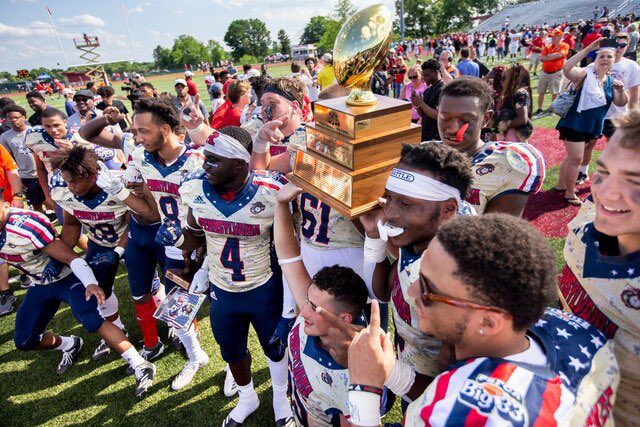 Baylor-bound Yusuf Terry caught a touchdown pass and ran for a score Monday to lead Pennsylvania to a 21-0 win over Maryland in the 62nd annual Big 33 Football Classic in Harrisburg, Pennsylvania. The Imhotep Charter grad was named Pennsylvania Most Valuable Player.

Pennsylvania has won five of its seven matchups against Maryland since the series resumed in 2013.

Below is a game summary from our friends at EasternPAFootball.com.

Harrisburg’s Kane Everson completed five of nine passes for 142 yards and two touchdowns. Yusef Terry caught one of those touchdown passes for 31yards and rushed for a 15-yard run to help lead Team PA Monday afternoon.

After a slow start in the first quarter, Pennsylvania got the first score of the game. Everson hit Yusef for a 31-yard touchdown pass. With 3:11 left in the quarter, Team PA led 7-0.

Terry took over the game. He scored on a double reverse from 15 yards out to give Team PA a 14-0 lead with 53 seconds left in the first half. Imhotep’s Tykee Smith had a late interception and returned it to Maryland’s 30. Bethlehem Catholic’s Anthony DaSilva’s 47-yard field goal attempt went wide left as the final seconds ticked off.

The game ended with a Pennsylvania win. Terry was named Pennsylvania MVP. He caught two passes for 75 yards and rushed for 24 yards on two carries.

MVP of The Big 33 Game ✅ pic.twitter.com/q6iAwPxuAF