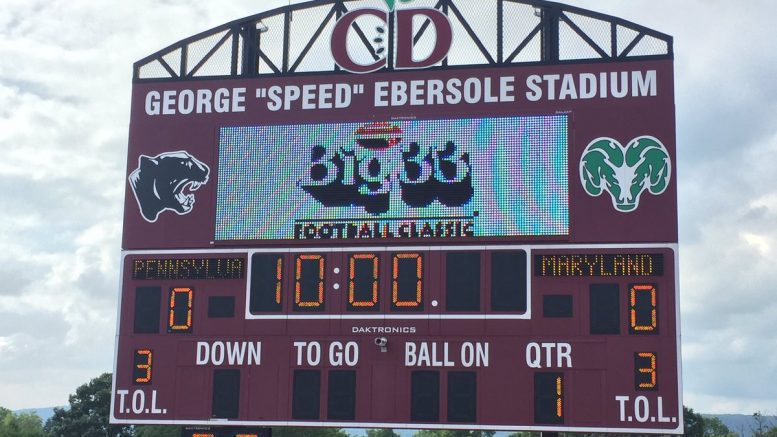 The 60th Big 33 Classic between Pennsylvania and Maryland had a different feel Saturday night, since it was the first time that the game that has produced an alum in every Super Bowl wasn’t played in Hershey, Pennsylvania.  The game was played at Central Dauphin High School’s Landis Field where 6,200 fans watched the Pennsylvania all-stars win for the fourth time in the last five games 44-33, which gives the Keystone State a 10-3 lead in the series between the two states.

The fact that the game was played at all was a bit of a minor miracle, since several months ago, the Big 33 Foundation, which was responsible for the game, closed its doors due to declining contributions and mounting debt.  The Pennsylvania State Football Coaches Association stepped-in to save the game, serving as host Saturday night.

On the field, North Penn quarterback Reece Udinski (VMI) and Cedar Cliff QB Grant Breneman (Colgate) both tossed two touchdown passes to lead the Pennsylvania stars. Udinski, who was named Pennsylvania MVP, was 9-of-15 for 187 yards.  Breneman was 7-of-13 for 217 yards.

Terrance Greene with the grab for PA! 23-21 PA over @Big33MD pic.twitter.com/iIJzD8rw87

Maryland led 21-17 in the third quarter, but after that it was all Pennsylvania. Maryland QB Evan Fochtman, who played at Archbishop Spalding and is headed to Navy, threw three touchdown passes.