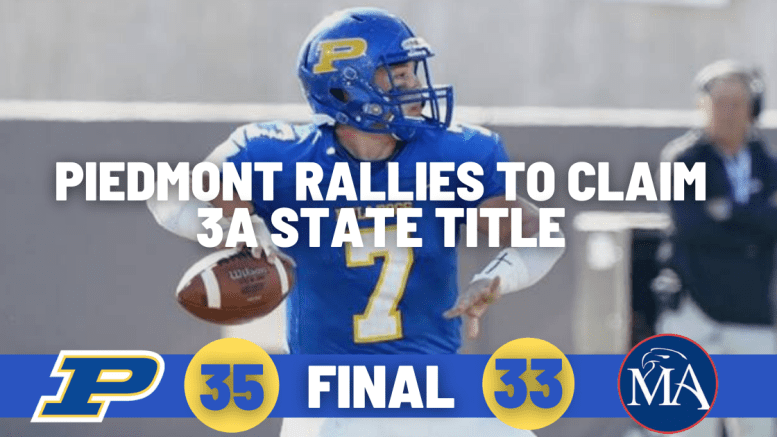 Everything changed for the better for Piedmont (13-2), however, and for the worse for Montgomery Academy (11-4) in the second half.

Piedmont quarterback Jack Hayes passed for three touchdowns and ran for another in the second half to rally the Bulldogs to a 35-33 victory over Montgomery Academy as  the Bulldogs  the Class 3A title for the second time in the last three years and fifth time since 2009. Piedmont overcame a 23-point halftime deficit for one of the greatest comeback efforts in AHSAA state football championship game history.

“I don’t think I’ve ever been a part of something like that,” Piedmont coach Steve Smith said. “We literally talked (at halftime) about having the greatest comeback in Super 7 history.”

The 3A title game, as well as the remaining five championship games set for Thursday and Friday, are being televised over the AHSAA TV Network and live-streamed over the NFHS Network. WOTM TV is producing the contests, and the AHSAA Radio Network is broadcasting all finals over its network of radio stations and the internet. Montgomery Academy (11-4) appeared in total control at halftime, holding a 29-6 halftime lead after scoring a touchdown and 2-point conversion with just 16 seconds to go before intermission.

“After we got that touchdown, it really set the mood for the second half,” Piedmont lineman Steven Raney said.

The Bulldogs’ defense forced two three-and-out before recovering a fumble at the Eagles 21-yard line early in the fourth quarter. Hayes threw a 25-yard touchdown pass to Austin Estes – on a third-and-15 play – to give the Bulldogs their first lead at 35-29 with 8:40 to play after Estes also scored the 2-point conversion.

“They believed in each other,” Smith said of his team. “Those guys came out and played a heck of a second half.”

Montgomery Academy seized control in the first half, as Chance Wilson blocked and recovered a Piedmont punt to set up a touchdown pass that staked the Eagles to a 14-0 first quarter lead and Wilson’s 67-yard interception midway through the second quarter made it 21-0.

Hayes completed just 2-of-10 passes in before halftime, but he and the Bulldogs emerged from the locker room with energy and poise in the second half. He finished 8-of-17 passing for 123 and three touchdowns and added 36 carries for 143 yards and two touchdowns. Estes had to catches for 53 yards and two TDs, and Omarion Foster caught two passes for 46 yards and one score. Brayden Morgan also had 51 yards rushing on nine carries.

Piedmont’s defense also limited the Eagles to just 44 yards in the second half, and the Eagles completed only one pass after halftime. Piedmont gave Montgomery Academy four points by taking two late safeties when the punter ran out of the end zone instead of risking another blocked kick.

“We just had to come out and come together as a team,” Hayes said. “Coach just told us we had 24 minutes left in the game to give it all we had and make it the best comeback anyone has ever seen.”

Jamal Cooper finished 5-of-12 passing for 106 yards and one TD and rushed for 66 yards and one score on 12 carries. Jashawn Cooper added 55 yards on 13 rush attempts. D.J. Vision had two receptions for 60 yards and Hardin had his 28-yard TD reception.

Piedmont ended the season on a five-game win streak – scoring at least 31 points in all five playoff wins.