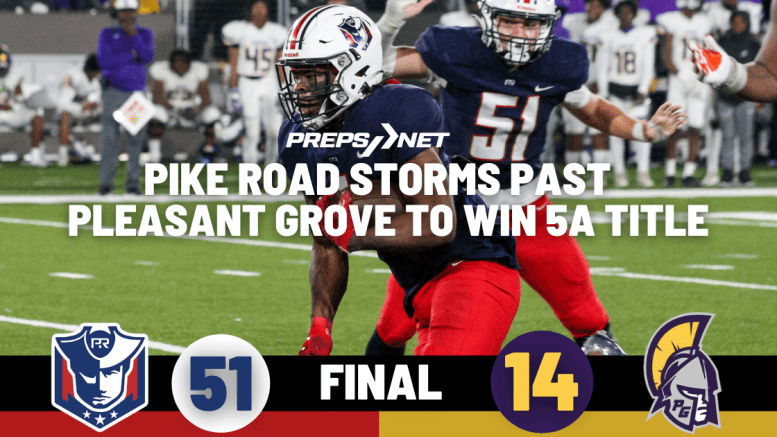 The following is from PrepsNet.com and AHSAA

By Josh Bean | For the AHSAA

Two-way standout Iverson Hooks added a 1-yard scoring run, intercepted a pass and made five tackles despite leaving briefly with an injury. Freshman phenom Anthony Rogers scored on runs of 30 and 23 yards, finished with 123 yards on 17 carries and added a 74-yard kickoff return for a touchdown.

Pike Road launched its program in 2016, moved into championship play in 2018 and has made four straight playoff appearances. The Patriots earned their first playoff win in 2019, won 11 games in 2019 and 2020 and rolled to an undefeated season and state championship this year. The school has gone 42-7 in the last four years and 36-2 in the last three seasons.

Pleasant Grove, coached by Darrell LeBeaux, finished as the 5A runner-up for the third consecutive season.

The three remaining finals in Classes 2A, 4A and 6A are set for Friday. All of the Super 7 championship games are being televised over the AHSAA TV Network and live-streamed over the NFHS Network. WOTM TV is producing the contests, and the AHSAA Radio Network is broadcasting all finals over its network of radio stations and the internet.

Pike Road took over in Spartans’ territory and needed just three plays to score. Rogers sprinted the final 30 yards for the touchdown less than three minutes into the game.

That opening sequence set the scene for the game as the Spartans struggled and Pike Road thrived. The Patriots scored touchdowns on four of their first five drives while attempting only one pass, and by the time Pleasant Grove’s offense crossed midfield, the Spartans trailed 27-0.

Hooks capped a seven-play, 48-yard drive with a 1-yard run, and Judkins scored on runs of 1 and 43 yards in the second quarter. The Patriots gained 180 yards on 27 first-half running plays and finished with 291 yards rushing on 55 carries and attempted only two passes all night.

Pleasant Grove’s Demarcus Lacey scored on a 5-yard run with three seconds to go before halftime and added a 15-yard TD run in the third quarter to make it 30-14. Rogers returned the ensuing kickoff 74 yards for a touchdown to push the Patriots’ lead to 37-14 and give momentum back to Pike Road with 2:13 to go in the third quarter.

Judkins, who earned MVP honors, scored on a 13-yard run after an interception in the final minute of the third quarter to push the Patriots’ lead to 44-14. Rogers closed the scoring with a 23-yard touchdown run late in the fourth quarter.

“This has been a culmination of what started in 2016,” Browning said. “It’s been a fun ride this year.”