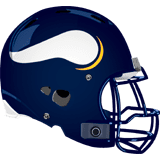 The Vikings took a 21-0 lead into the fourth quarter and held-off the Trojans who made a furious comeback.

2017 NFL Draft – Where 2nd Round Picks went to High School