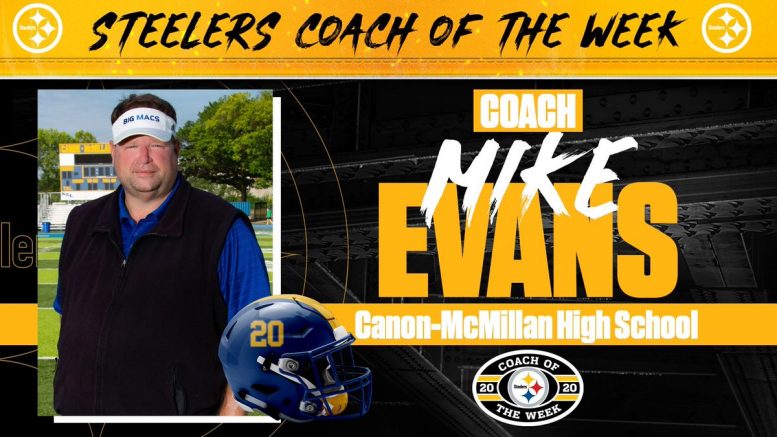 Canon-McMillan head coach Mike Evans is this week’s Pittsburgh Steelers Coach of the Week. Evans is in his sixth season as the head coach at C-M.

Since arriving at Canon-Mac, Evans’ teams have broken 26 school records.  The program also returned to the playoffs for the first time in over a decade with back to back appearances in 2018 and 2019.

After falling behind by 17 points, the Big Macs got a big spark from a 90-yard kickoff return for a touchdown, which led to 24 unanswered points and an upset win over No. 4 ranked Mt. Lebanon. Canon McMillan scored on 6-yard run in the fourth quarter to complete the comeback over the Blue Devils 24-17 in Class 6A conference action. Coach Evans is in his 6th year of leading the Big Macs after serving 16 years as a college assistant.

Podcast: Frankford Pioneer head coach Bill Sytsma talks about the tragic shooting death of one of his players in Northeast Philadelphia