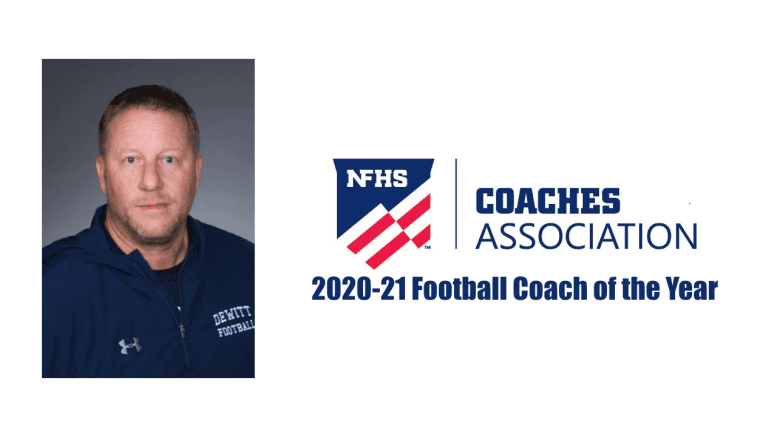 In 2020, Zimmerman led the Panthers to Michigan’s Division 3 state championship. This past season, DeWitt lost to nationally-ranked Detroit Martin Luther King in the Division 3 title game.

Below is the NFHS description of Zimmerman’s honor from the NFHS Coaches Association:

In his 26th coaching season, Rob Zimmerman guided the DeWitt (Michigan) High School football team to an undefeated 12-0 season and a Michigan High School Athletic Association Division 3 state championship – his first title in five championship game appearances. DeWitt’s sensational season brought a slew of coach-of-the-year (COY) honors for Zimmerman – 10 total – including the USA Today State of Michigan Coach of the Year, Detroit Lions Coach of the Year, three different state COY awards from the Michigan High School Football Coaches Association (MHSFCA) and a runner-up finish for the NFL Don Shula National Coach of the Year award. Counting his 2020 accolade, Zimmerman has been named MHSFCA regional COY 14 times since 2000 and won the Lansing State Journal “Coach of the Decade” distinction for the 2000s. He has turned DeWitt football into one of the most prominent programs in the state with 19 conference championships in his 23 seasons at DHS – including the past 16 in a row – 14 district championships and 12 regional championships. His teams have performed exceptionally well in the classroom, too, receiving 1st team academic all-state honors in each of the past nine seasons.

Below, you can listen to Zimmerman talk with High School Football America’s Jeff Fisher about the honor and the Panthers’ great two year run.

Listen to past HSFA Podcasts