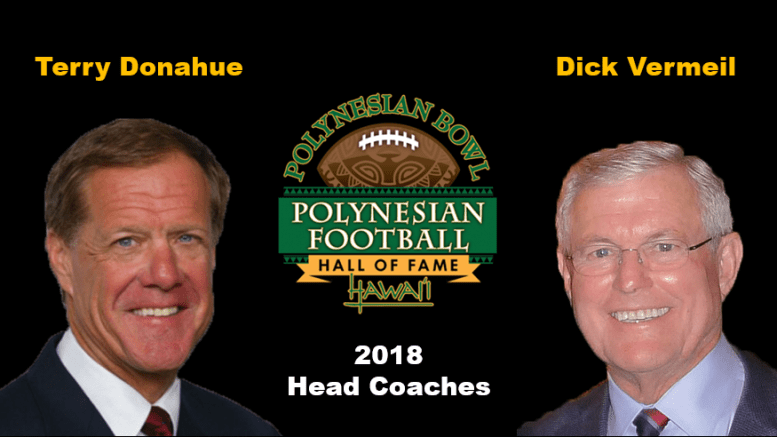 The Polynesian Bowl, which will be played January 20, 2018 at Aloha Stadium in Honolulu, Hawaii, will have two very special head coaches for its second game.

Jesse Sapolu, co-founder of the Polynesian Hall of Fame, which sponsors the game, told us on the High School Football America Radio Show that Terry Donahue and Dick Vermeil will lead 90 nationally-ranked players of Polynesian heritage and other ancestries.

“Dick Vermeil and Terry Donahue have coached a lot of Polynesian kids over the years,” said Sapolu. “They both have a soft spot for the Polynesian culture, so it was natural for them to come on-board and help.”

“It’s a genuine honor to coach in the 2018 Polynesian Bowl,” said Vermeil in a press release. “I look forward to working with the NFL stars of tomorrow.”

“This is an exciting opportunity to coach the nation’s elite high school football players,” Donahue said in a release. “It will be an incredible experience at a very special place.”

Aside from being the head coach of the Eagles, Vermeil also was the head coach of the St. Louis Rams and Kansas City Chiefs.  He led the Rams to their only Super Bowl championship in 2000.  He is the only coach to have the distinction of being Coach of the Year on four levels — high school, Junior College, NCAA Division I and Professional Football.  After graduating from San Jose State, Vermeil spent three years as head coach at Hillside High School in San Mateo, California.