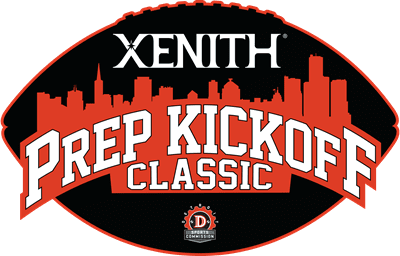 The 2017 Prep Kickoff Classic will feature 13 teams from Michigan and one from Indiana.  The three-day event will feature seven games between August 24th and the 26th at Wayne State University.

Headlining the three-day event will be two-time defending Michigan Division 2 champ Detroit Martin Luther King taking-on Indiana-power Indianapolis Cathedral.  The two will square-off in the seventh game of the event on August 26th at 6 P.M.

MLK finished 2016 ranked No. 3 in the High School Football America Michigan Top 10 with a 12-2 record.  The Crusaders’ only losses were against Division I champ Cass Tech, which finished No. 15 in our national rankings last year.

Returning for MLK is Class of 2019 quarterback Dequan Finn, who led the Crusaders to a state title as a sophomore.  Other top players are seniors-to-be wide receiver Erik Gibson, who has given his verbal commitment to Minnesota, and cornerback Jaeveyon Morton, who has 18 college scholarship offers.  Junior-to-be safety Marvin Grant is the No. 3 overall prospect in Michigan in the Class of 2019.  Grant has offers from Michigan and Notre Dame.

Cathedral (7-5 in 2016) has two seniors-to-be that have already given their verbals to Michigan and Notre Dame.  Center Michigan-recruit Emil Ekiyor is the top-ranked prospect in the Hoosier State, according to 247Sports.com’s composite rankings.  Ekiyor, a 4-star recruit, is ranked the No. 95 overall prospect in America.  Notre Dame-recruit running back Markese Stepp is the No. 2 overall prospect in Indiana.

Napa HS (California) may not cancel 2017 season after all