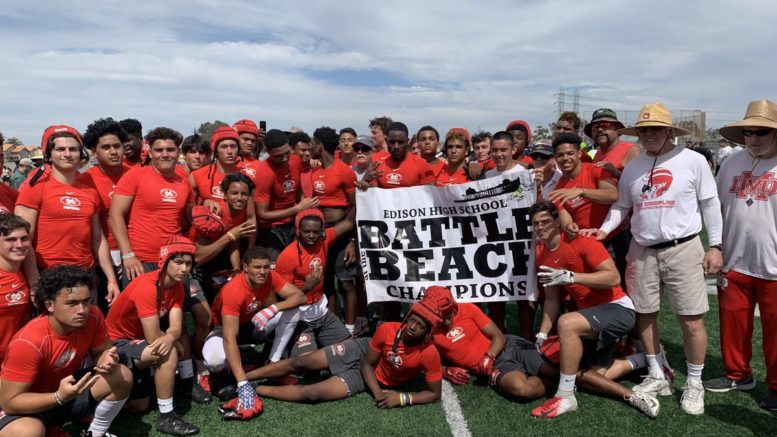 Yes, it’s only 7-on-7, but whenever Mater Dei and St. John Bosco step on the field together, it’s another chapter in their tense rivalry. Saturday, at Edison’s Battle at the Beach 7-on-7 passing tournament, Mater Dei, ranked No. 1 in our Preseason 100 national rankings beat the Braves, ranked No. 2, for its fourth straight tournament championship at the event in Huntington Beach, California.

The most amazing thing about the 24-12 win by Mater Dei is the Monarchs were without USC-verbal commit quarterback Bryce Young, who is spending the weekend at the Elite 11 quarterback competition in Texas. Instead, MD captured the title with Toby Schmidt at the helm. Last year, Schmidt was the starter on the freshman team.

Bosco 5-star QB D.J. Uiagalelei was supposed to be at the Elite 11, but instead chose to be with him teammates at the Battle at the Beach. Uiagalelei, who has given his verbal commitment to Clemson, chose being with the Braves to get ready for his senior season after spending a lot of time on the baseball diamond and then injuring his hand.

In the 3rd place game, Norco beat Oaks Christian. OC is ranked No. 54 in our Preseason 100. Norco made our Honorable Mention list.