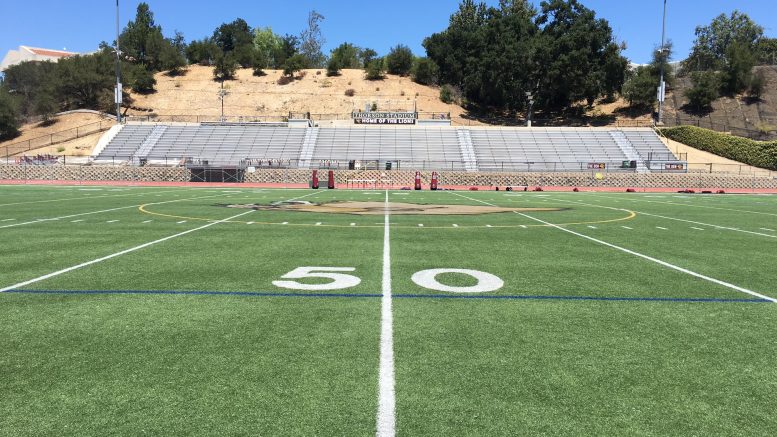 Yes, Friday night is just the start of the 2016 season in Southern California, but there are several big games with one of the best being a battle between Chaminade, ranked #4 in the High School Football America Southern California Preseason Top 25, against seventh ranked Oaks Christian at Thorson Stadium in a non-league contest.

Both teams enter the game with seasoned junior quarterbacks, who have started since their freshman season.  The only difference is this will be Brevin White‘s first game with Chaminade after transferring from Alemany after two years with the Warriors.  Oaks Christian‘s Matt Corral, who’s already given his verbal to USC, is coming-off a 2015 campaign that saw him lead the Lions to a 11-1 season that ended with a second round loss in the CIF Southern Section PAC-5 playoffs to Bishop Amat.

Corral put-up some great numbers, completing 68-percent of his passes for over 3,200 yards with 36 touchdowns and only six interceptions.  He also rushed for over 400 yards and five scores.

Corral will need to find a new favorite receiver, now that Michael Pittman has moved-on to USC.  Last year, Pittman, who caught 81 balls, accounted for nearly half of Corral’s 168 completions.  Michael’s brother Mycah Pittman could be the answer.  Last year as a freshman, Mycah caught 14 balls, which was good enough for fourth most on the team.

Speaking of family ties that could help, senior Michael Owusu, who’s brother Francis is now at Stanford, caught 15 balls last year with an average of 15.5 yards per catch.  And, let’s not forget about the top tight end in the country Colby Parkinson, who’s given his verbal to Stanford.  Parkinson was second on the team with 24 catches with four touchdowns.  He averaged 20.4 yards per grab.

White, who’s brother Brady is battling for the starting QB job at Arizona State after a four-star career at Hart (Newhall, CA), has three offers, one from his brother’s school, plus Washington and Washington State.  The transfer of White had to put a smile on head coach Ed Croson‘s face after a 7-4 season that saw Croson have to use his star receiver Dymond Lee at quarterback.  Lee, who is now back to his regular position at UCLA, led the Eagles into the CIF-SS playoffs where they lost in the first round to eventual section champ Corona Centennial.

For Chaminade fans, the good news is that the Eagles have plenty of weapons to surround White with.  running backs T.J. Pledger and Andrew Van Buren is back along with receiver Michael Wilson.  Pledger ran for over 1,300 yards last year with eight TDs, while Van Buren was just over 400 yards with five scores.

For Oaks Christian head coach Jim Benkert, his biggest job during fall camp was to find replacements for a dozen starters lost from last year’s squad.  On defense, Benkert will rely on junior linebacker Bo Calvert, who’s given his verbal to USC.  Calvert had 58 tackles last season.

For Chaminade, look for Kyron Charles and Jahlil Pinkett in the secondary to lead the team at the start on defense.