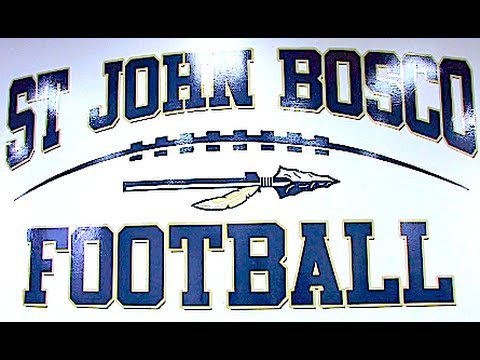 St. John Bosco has proved in the first two weeks of the 2015 season that the graduation of quarterback Josh Rosen, who began his college career in a big way at UCLA with a win over Virginia over the weekend, hasn’t spelled the end of the Braves recent success.

Bosco, ranked #6 in the latest High School Football America Top 25 and #2 in our Southern California rankings, has rolled to a 2-0 start while averaging over 70 points a game.  The Braves opened with a 76-8 win over La Mirada and then cruised past Norwalk 67-7 on Friday night.

This week, the Braves will take to the road to face two-time defending Oregon Class 6A champ Central Catholic in Portland. The Rams opened the season Friday night with a 27-14 loss to Jesuit. Central Catholic entered the game ranked #1 in the state while Jesuit was #2.

Rosen’s replacement, senior Quentin Davis, has been nearly perfect in his first two games.  Davis has completed 34-of-41 passes for 587 yards and eight touchdowns without an interception.  His quarterback rating is 162.9.  In addition, Davis has rushed for 86 yards — 10.8 yds. per carry.

Up until Friday’s loss to Jesuit, Central Catholic had won 27 straight.  The Rams are trying to do what no other Oregon big-school team has ever done, which is win three straight state titles.

The strength of the 2015 Rams is on the defensive side of the ball with Oregon verbal commits linebacker La’Mar Winston and safety Brady Breeze.

Offensively, Central Catholic will rely on running back Ronnie Rust, who will operate behind a young, rebuilt offensive line.

These two met last year in Bellflower in a game that was tied at 14 late in the third quarter.  Thanks to a strong defensive effort in the second half, the Braves scored 35 unanswered points to win 42-14.  The Ram secondary held Rosen to just 98 yards passing in the game.

To put that in perspective, Saturday, starting as a true freshman for UCLA, Rosen completed 28-of-35 passes with three touchdowns and no interceptions.