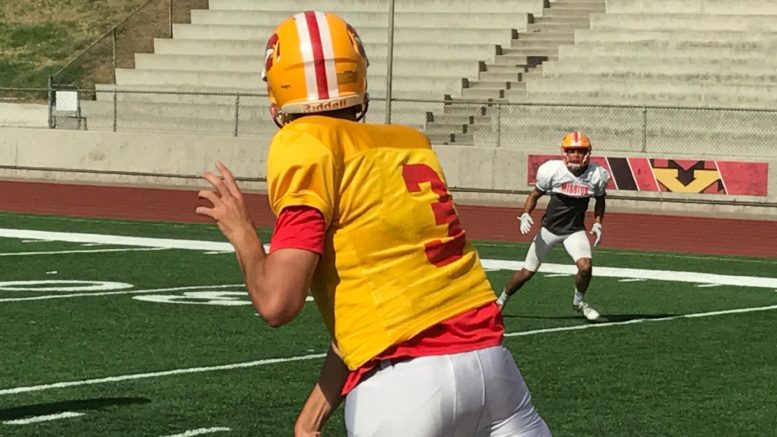 As September rolls through, the high school football competition continues to heat-up here in Southern California.  The big matchup this week comes tonight when Mission Viejo (3-0), No. 32 in the High School Football America Top 100, travels to Veterans Memorial Stadium to face No. 41 Long Beach Poly (2-0).

Last year’s meeting between the two ended in a 42-14 win by the Diablos, making this week a chance for the Jackrabbits to redeem that outcome.

“We know their big time players. We know they’re the best in the country,” said senior linebacker Christian LaValle. “But really we’re not going to prepare for them any differently than we would any other team. We’re going to go out there and do the same stuff we always do, prepare the same way we always do.”

One of those “best in the country” players is Poly’s 4-star quarterback, Matt Corral, Florida commit ranked the No. 3 Pro-style B in the nation in the Class of 2018 class, according to 247Sports’ composite rankings.

Corral, who transferred to Poly after spending his first three years at Oaks Christian, is off to a fast start with the Jackrabbits.  In two games, he’s completed 43-of-69 passes for 633 yards with four touchdowns and one interception.  Jalen Hall, the No. 5 receiver prospect in the nation, has caught 13 of those balls with one touchdowns.

This means Mission Viejo will rely heavily on a strong performance from their defense. They must find ways to shut down both Corral and Hall. The good news for the Diablos, however, is that this year’s defensive unit features a group of mostly seniors who have plenty of experience playing together.

A leader on the defensive side of the ball is Arizona State-commit LaValle, who says his group has been preparing all season in order to be ready come game time.

“We’re a close knit group of guys,” said LaValle. “Defense stays after practice pretty much every week and does some extra running…some extra things to make sure we’re 110% ready on Friday night.”

On the other side of the ball, Mission Viejo head coach Bob Johnson is hoping junior quarterback Joey Yellen continues to grow as he enters his fourth varsity start after transferring from another Southern California powerhouse, St. John Bosco.

While most of the attention this week will be on Corral, Johnson is more than happy with whom he’ll have calling plays behind center.

“He’s learning everyday. He’s found a home and he’s really enjoying it and so are we enjoying him…He’s had a good year and I think nothing but better is coming up,” said Johnson.

Yellen has had a great start this season, throwing for a total of 599 yards and nine touchdowns in his first three games with the Diablos. However, he is quick to credit his teammates for making him look so good.

“We have four of the most unselfish receivers you could ask for,” said Yellen. “It makes it really easy for me.”

Of course, playing against a team like Long Beach Poly this week will be anything but easy for Yellen and the rest of the Diablos, but it is the tough battles like this that will keep things interesting this September and throughout the rest of the fall season.

That challenge of pitting two notable powerhouse schools against each other with some of the top recruits in the nation going head to head is what makes games like this so enjoyable for coaches like Johnson and other fans of high school ball. No. 2 IMG Academy survives scares from No. 11 Miami Central