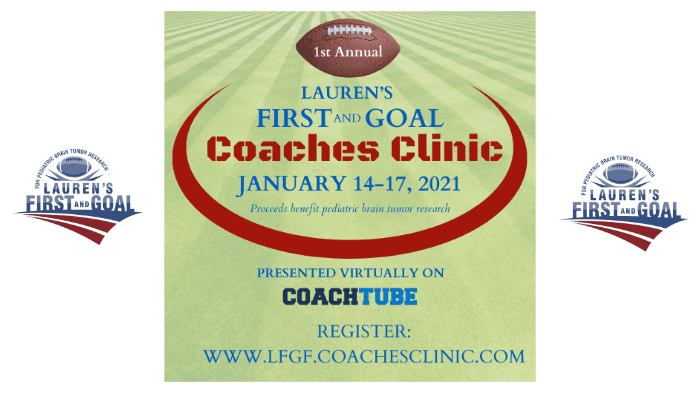 If you’re a football coach, you won’t want to miss the upcoming Lauren’s First and Goal Coaches Clinic that will be held virtually January 14th through the 17th. All of the proceeds from the clinic benefit pediatric brain cancer research.

Lauren’s First and Goal (LFG) is a non-profit organization and a labor of love started by John and Marianne Loose in honor of their daughter, Lauren, a pediatric brain tumor survivor. John, who is the Assistant Head Football Coach at Army, founded LGF with his wife in 2004.

Since its inception, LFG has raised more than $2 million toward its mission to provide financial support for brain tumor research and cancer services, to offer financial and emotional support to families living with pediatric cancer, and to increase awareness of the disease.

Below is a partial list of speakers from Lauren’s First and Goal: