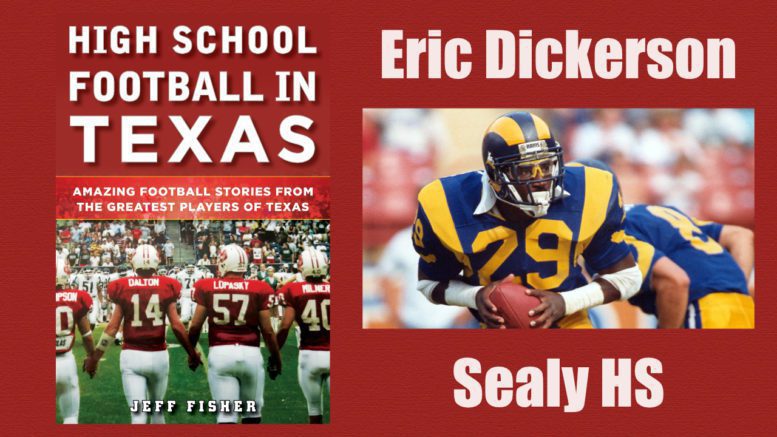 We’re coming up on the first anniversary release of my book High School Football in Texas: Amazing Football Stories from the Greatest Players of Texas. The book features interviews with nearly 50 NFL players talking about their Texas high school football memories. Nine of those players I interviewed are in the Pro Football Hall of Fame.

Buy High School Football in Texas: Amazing Football Stories from the Greatest Players of Texas online at Barnes and Noble

Eric Dickerson’s story is in my book. Today, as part of our Rewind Wednesday feature, you can see Dickerson carrying the ball for the Sealy Tigers during the 1978 Texas high school football championship game. Coming into the contest against Wylie, Dickerson had been hampered by an ankle injury, but you couldn’t see any issues with it when the future Hall of Fame running back hit the turf at Baylor University.

Dickerson ran for a then playoff record 296 yards and four touchdowns (3 rushing, one receiving) in a 42-20 Class AA state championship win. Dickerson left the field with over 5,900 career rushing yards.

After the game, Oklahoma Sooners head coach Barry Switzer said this about the 6-3, 210-pounder:

He’s a phenomenal athlete. He has everything a great player should have — the size and 9.4 speed. What else do you have to have? He ought to dress in a phone booth.”

Below you can listen to a portion of my interview with Dickerson during which he thinks back on Sealy’s 15-0 run to a state championship.