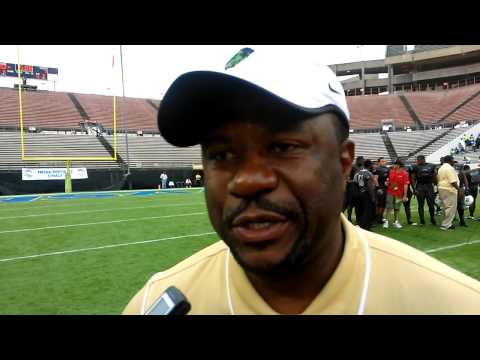 Next Saturday, High School Football America will release its Preseason Top 25.  Between now and then, we’ll take a look at some of the top teams that are vying for spots in our national rankings.

Today we head to South Florida for the Miami Central Rockets.

When we had head coach Roland Smith on our radio show in May to honor him as the NHSCA/High School Football America National Coach of the Year, the third year coach of the Rockets said he knows there’s a bullseye on his team this year because of three straight 6A state championships and a ton of talent returning from last year’s squad that finished #7 in the High School Football America Top 25.

“We love a challenge,” said Smith, who before coming to Miami Central led Miami Northwestern to national prominence. “We know every time we go out to play, we’re going to get every team’s A-game. We treat every game like it’s a state championship game.”

The Rockets, who last year knocked-off three-time Alabama state champ Hoover on national television in their season opener, will begin this season by traveling north to play powerful DeMatha, which has won back-to-back Washington Catholic Athletic Conference titles and is also in contention for a spot in our national rankings.  A week later (September 4th), Smith gets another crack at three-time 4A champ Booker T. Washington, the only team to beat the Rockets over the past two seasons.

“We’ve had some great battles with the last couple of games coming down to the last drive,” said Smith, who prior to coming to Miami Central had never lost to crosstown rival Booker T. “We just came-up on the short end of the stick, but this year, we’re looking to change that.”

Defensively, the Rockets are as good as anyone in the nation.  Defensive end Keir Thomas, who is a Florida State verbal commit, returns for his senior season after 18 sacks and six forced fumbles last year.  Joining Thomas up-front is Eric Mitchell, who’s given his verbal to Florida.

Linebacker Donavan Thompson, who led the team in tackles (167) and had 14 sacks, returns, along with junior Waynmon Steed, who’s given his verbal to the Miami Hurricanes.

In the secondary, another Florida State verbal, Jamel Cook is back after leading the team with five interceptions last year.

On offense, Smith has a seasoned signal caller in Jerrod Thomas.  He also has depth at QB thanks to the transfer of Anthony “Mo” Hasan from Gulliver Prep.

Speaking of transfers, Miami Central has picked-up quite a few in the off-season, including wide receiver Darnell Salomon from Champagnat Catholic.  Salomon, who is uncommitted, is ranked as the 51st best prospect in America in the USA Today High School Sports Composite Rankings.

Salomon is a great replacement for graduated receiver Da’Vante Phillips, who is now at Florida State, who caught 148 balls last year for over 2,000 yards and 29 touchdowns.

The offensive line has two starters back from last season — Navaughn Donaldson (tackle) and Mershawn Miller (guard), who both tip-the-scales above 300 pounds.

Smith, who loves a team that can run the football, will count on Coral Gables transfer Mike Kenio at running back.

You can listen to our interview with Coach Smith below.