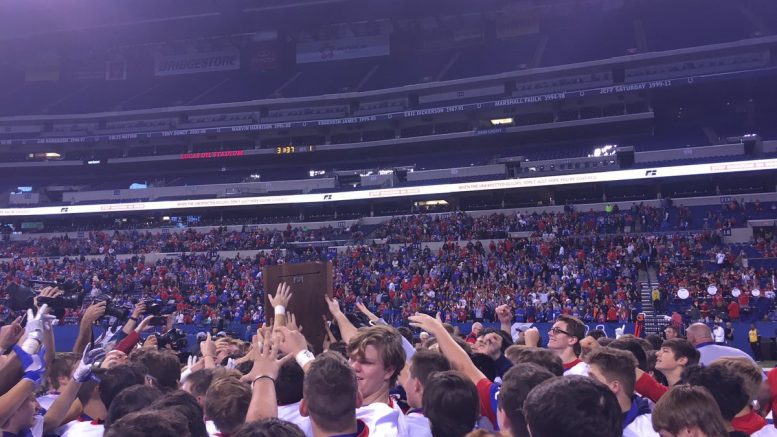 A huge defensive stop in the fourth quarter turned the tide for top-ranked Roncalli, and Rebels quarterback Derek O’Connor took it from there.

With his team leading No. 2 NorthWood 28-22, Roncalli’s Dylan Williams picked off Panthers quarterback Trey Bilinski at the Rebel 8 yard line and returned the ball 42 yards. Five plays later O’Connor broke off a 22-yard touchdown run – his third of the day – to clinch Roncalli’s 34-22 win. It was the ninth overall football state title for the Rebels, tying them with Sheridan for the fourth most in state history, and was the seventh championship for Head Coach Bruce Scifres.

O’Connor hurt the Panthers with both his legs and arm. He completed 11-18 passes for 159 yards and a score, and ran for a game-high 154 yards. He helped the Rebels rack up 417 yards of total offense and nearly 32 minutes of possession.

Roncalli (15-0) built a 14-0 lead late in the first half on Connor’s 2nd short touchdown run of the game. Connor directed scoring drives of 13 and 11 plays, using up more than five minutes of clock each time, to put the Rebels in control early.

But after being held to 30 yards of total offense in the first 18:21 of the game, NorthWood’s high-powered offense finally started clicking. Bilinski connected with Bronson Yoder on completions of 33 and 21 yards, setting up his own 2-yard scoring run with 1:33 left in the half the drew the Panthers within 14-6.

A back-and-forth third quarter saw four scoring plays of 31 yards or more. For Roncalli, Luke Smock had a 34-yard run, while teammate Jacob Luedeman caught a pass from O’Connor near midfield, briefly stumbled but then regained his balance and raced into the end zone to give the Rebels a 28-14 lead.

NorthWood’s Brayton Yoder scored on 36- and 31-yard runs, the latter bringing the Panthers (14-1) within 28-22 with 1:48 left in the third.
The Panthers, the 2005 3A state champs, finished second for the first time under Head Coach Nate Andrews and for the sixth time overall.

State Records Tied (4A Team)
Most First Downs: 24 by Roncalli (tied 3 others).

Minnich is a three sport athlete also participating in basketball and baseball.  He is a four-year letter winner in football and baseball and named captain in both sports. He has earned Scholar Athlete all four years, Junior IFCA All-State football team 2015, All-NLC Pitcher in baseball for 2016, and invited to IHSBCA Junior Showcase at North vs. South games. Outside of athletics, he is first in his senior class academically, a member of the NorthWood Student Leadership Academy, National Honor Society, Nappanee Missionary Church, and the NMC Youth Program. His community involvement continues with volunteer work in Feed My Starving Children and the Nappanee Rotary Club Fundraiser.

Drew is the son of Darren and Lisa Minnich of Goshen, IN.  He has signed a National Letter of Intent to continue his athletic career at Cedarville University in Cedarville, OH.

Each year the IHSAA Executive Committee selects a senior player who was nominated by his principal and coach and was determined to have best demonstrated mental attitude, scholarship, leadership, and athletic ability.

The Indianapolis Colts presented a $1,000 scholarship to NorthWood High School in the name of Drew Minnich. The Colts have been the presenting sponsor of the entire football state tournament since 2009, including the mental attitude awards.