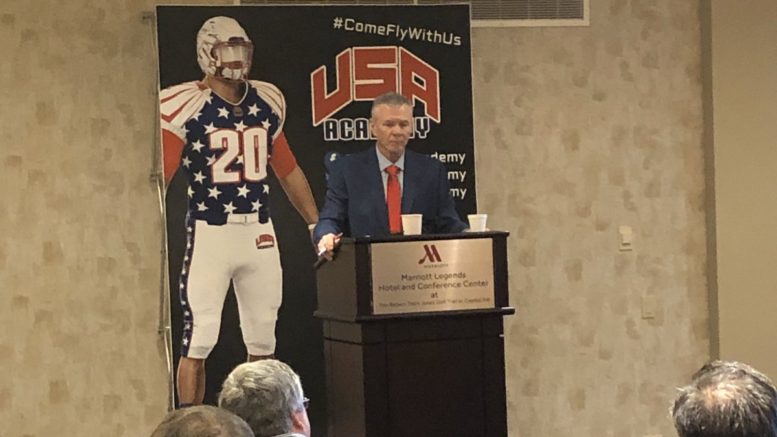 After a year away from high school football, Rush Propst is back. He’s been hired as the new head coach at the Ultimate Student Athlete Academy, which will be known as USA Academy, a new private school in Alabama.

While there are no buildings or a football field on the school’s proposed campus that will be located in Coosada, Alabama, the program expects to be playing football in the fall with a national schedule that will be announced in the very near future, according to the school’s website.

Below is the school’s mission statement from its website:

ULTIMATE STUDENT ATHLETE’S MISSION IS TO SEEK EXCEPTIONALLY PROMISING STUDENT ATHLETES OF ALL BACKGROUNDS FROM ACROSS THE NATION AND AROUND THE WORLD AND TO EDUCATE THEM, THROUGH MENTAL DISCIPLINE, PHYSICAL DISCIPLINE AND ATHLETIC EXPERIENCE. OUR AIM IS TO CULTIVATE THEIR CREATIVE, INTELLECTUAL, MORAL, CIVIC, AND ATHLETIC CAPACITIES TO BEYOND THEIR OWN UNDERSTANDABLE LIMITS, WHILE PUTTING THEM ON A NATIONAL STAGE TO EXCEL IN THEIR HIGH SCHOOL ATHLETIC EXPERIENCES, WHILE PREPARING THEM FOR THE NEXT STAGES OF LIFE IN WHATEVER GOD HAS PLANNED.

Propst is a highly-successful, but highly-controversial coach who owns seven state championship in Alabama and Georgia. He spent 2019 without a coaching job after he was fired in mid-March from Colquitt County in south Georgia.

Colquitt County Board of Education relieved Propst of his coaching duties after the school conducted an investigation in undisclosed allegations of misconduct.

Propst’s record with the Packers was 119-35 with state titles in 2014 and 2015. The ’15 team was named as the “mythical” High School Football America nation champs.

The school says it will recruit kids from around the nation, who will take a combination of online and traditional classes.

USA Academy founder Dusty DeVaughn has told media outlets like al.com, the online curriculum is the same used by public virtual schools and is NCAA approved. He also has said the school plans to seek accreditation.

As far as facilities, there’s a news release on the school’s website with a rendering of its future football field that can be seen below.

On Monday, the school announced the hiring of Propst’s former defensive coordinator Jeff Kent as the team’s DC. Last year, Kent served as the DC at Cairo High School in Georgia.