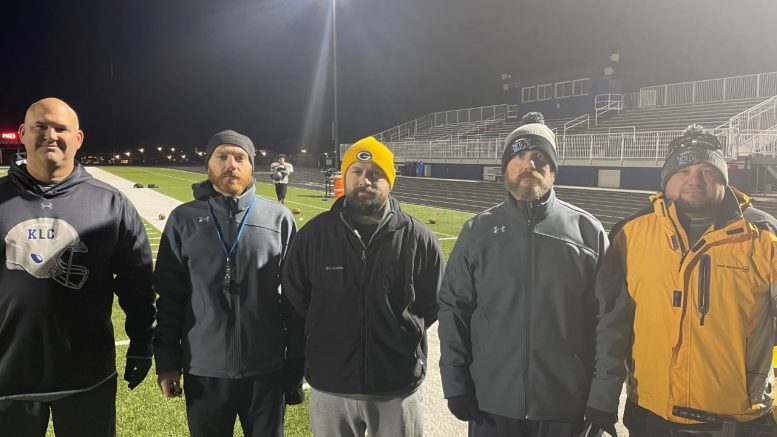 KLC (Kohler/Sheboygan Lutheran/Sheboygan Christian) head coach Ryan Eigenberger is this week’s Green Bay Packers High School Coach of the Week. Two years removed from a winless season, Eigenberger and KLC will open the first round of the Division 3 playoffs this weekend.

Below is a story from packers.com that salutes Coach Eigenberger:

The Packers have announced that Ryan Eigenberger of Kohler/Sheboygan Lutheran/Sheboygan Christian (KLC) in Kohler, Wis., has been named the Green Bay Packers High School Coach of the Week.

Eigenberger, in his second year as head coach of KLC, just capped off a 6-1 regular season with his team defeating the previously unbeaten Two Rivers High School on Friday, Nov. 6. KLC now enters Round 1 of the WIAA Division 3 Football Tournament on Friday, Nov. 13, with a match-up against No. 1 seed Xavier High School.

Prior to Eigenberger taking over the program last year, KLC was winless in 2018. Under Eigenberger’s leadership, the team improved to 3-6, narrowly missing the playoffs in 2019. Eigenberger and his team continued to build on their success and have completely turned the program around this season.

“I think one of the biggest things, in looking at the changes we have made, is really looking at what type of athletes we have in the Sheboygan County area, at our three schools, and how best we can utilize their skills,” said Eigenberger. “We’re not going to be the type that is going to be a power run team ever. It’s a big basketball area around here, and those guys like to have the ball in their hands, so we wanted to spread it around and get the ball out there as much as we can. That’s not done very much even in the state of Wisconsin, the way we spread it around and throw the ball. There are more teams that have been doing it in the last five years, but it is still a lot of power run, wing-t offenses. We said, ‘Come be a part of something new to this area, to our three schools, let’s make this a football area. Let’s buck that [power run] trend, but also not fight what we don’t have. Let’s utilize our skills, our athleticism, and let’s be leaders in that regard.’”

Eigenberger graduated from Sheboygan North High School in Sheboygan, Wis., in 2009. Throughout high school, he participated in football and baseball. He played quarterback and defensive back under head coach Steve Brickson. Following high school, he graduated from UW-Whitewater in 2013. Eigenberger’s coaching career began as an assistant coach for his high school alma mater, where he helped coach in the summer and made it back on the weekends when he was able to travel from UW-Whitewater in 2009 and 2010. He joined the KLC staff in 2016 as an assistant coach. Last year, Eigenberger was named the head coach of the three-school program.

Eigenberger attributes the Coach of the Week Award to his staff and players’ hard work and meeting the challenges that have come with this unique year.

“It’s a great honor to me as a lifelong Packers fan to win this award. But what it reflects more is just how hard our players have worked, and how they’ve responded so well during this whole 2020 season. Starting all the way back in March, they were tracking their workouts at home that we would give them. Then right away in July, as soon as we could, we had great turnouts at our workouts every day, and I think that’s what we are seeing come through now. So, it’s really a great honor to win this as a coach, but it’s really the whole thing that we’re putting together as a team and as a program. We really have so many guys buying into that and it’s incredible to be a part of.”

Eigenberger and his staff oversee a program of 34 players. His assistant staff includes Mike Nikson, Patton Connour, Corey Girdaukas and Rob Michael. In addition to being the head coach, Eigenberger is also a social studies and English teacher at Kohler High School.

About the Green Bay Packers High School Coach of the Week Program:

The Green Bay Packers Coach of the Week program supports football outreach efforts by giving high school coaches the recognition they deserve. Nominations can be submitted by 10 a.m. every Monday to Ryan Fencl, Packers football outreach specialist, at [email protected]. All nominations should include the nominee’s name, address, school, phone number and reason he/she is deserving of the award. This year, because some schools have postponed their football seasons to the spring due to COVID-19, the Packers are seeking coaches to be nominated regardless of their teams’ on-field performance or whether they are playing in the fall or spring. Rather, the nominee could be honored for how they have turned programs around, how the team has impacted the community, or how the coach impacts the players and their families.

See what the Green Bay Packers are doing in the community