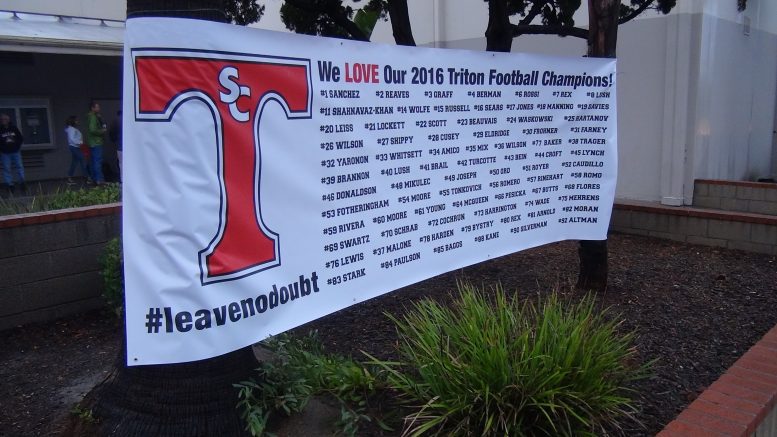 The San Clemente football team spent eight hours on a bus Friday, but the journey was worth it.  The Tritons, currently ranked #7 in the High School Football America SoCal Top 25, traveled north to Sacramento where they will face defending state champ Del Oro (13-2) Saturday at 4 P.M. in the CIF Division 1-A state championship game at Sacramento State University.  In our statewide rankings that are created with our proprietary algorithm, San Clemente is ranked #11 in the state, while Del Oro is #13.

The game is the culmination of a magical run through the CIF-Southern Section playoffs, which saw ninth-seeded San Clemente (12-3) beat the three of the top seeds — #1 Heritage, #2 Murrieta Valley and #4 Valenica — to win the Division 2 championship.  Last weekend, the Tritons beat Edison 39-35 on a last second touchdown.

Friday on a damp and rainy day in usually sunny San Clemente, the team’s buses were escorted to Interstate 5 by police and fire trucks blaring their sirens and fans lining the exit of the school to cheer-on their team.  Before leaving, I caught-up with head coach Jaime Ortiz, who talked (below) about the task ahead — trying to bring home state gold.

San Clemente senior quarterback Jack Sears has led a powerful offensive attack with his arm and his leg throughout the season.  Sears, who has given his verbal commitment to USC, has completed nearly 67-percent of his throws for 2,504 yards with 36 touchdowns and only four interceptions.  On the ground, Sears has averaged 6.9 yards a carry while picking-up 1,099 yards and nine touchdowns.  Junior Austin Whitsett is second on the team in rushing with 1,065 yards, followed by senior Brandon Reeves, who’s averaging over 10 yards a carry with 708 yards and 14 TDs.  Reeves is Sears favorite target with 70 catches and eleven touchdowns.

In addition to playing in its second straight state championship and fourth since 2011, Del Oro’s campus is only 30 minutes away from Sacramento, which will give the Golden Eagles a bit of a home field advantage.

Senior quarterback Stone Smartt has complete over 68-percent of his throws for 2,862 yards with 29 touchdowns and only six interceptions.  He’s also rushed for 841 yards and ten touchdowns.

Changes at the bottom of the latest Top 25

Where 2016 NFL Draft 6th Round picks went to high school