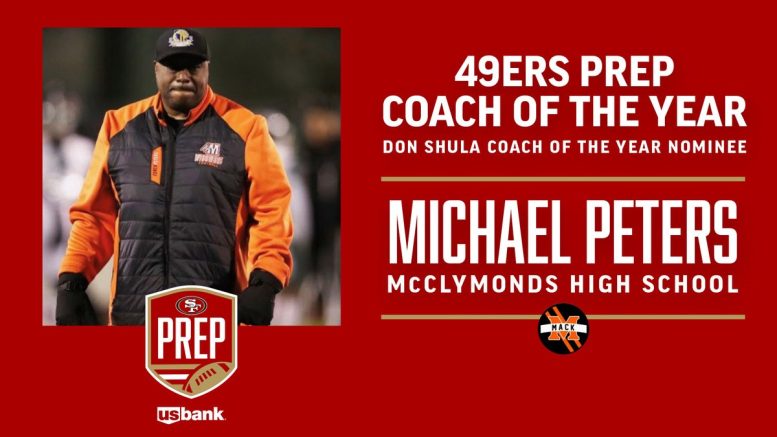 As the 2021 fall season of high school football comes to an end, 49ers PREP presented by U.S. Bank awarded its Charlie Wedemeyer Memorial Coach of the Year and NFL Don Shula Coach of the Year nominee to Michael Peters, head coach of McClymonds High School. Coach Peters and the McClymonds Warriors finished the season 12 – 1, claiming their fourth CIF state title in the process.

McClymonds came away victorious with a 54 – 7 win over the Birmingham Patriots in the state final. After an early punt return for a touchdown, the Warriors special teams gave a spark to the rest of the team. The offense went on to score a rushing touchdown and three passing touchdowns while the defense held the Patriots scoreless going into halftime. The Warriors had a full team effort to cap off the 2021 season finale. Not only did they dominate on the field, but they also made a difference in the city of Oakland.

Coach Peters has been a light for the Oakland community. Throughout the year, he and his team have put on a free football camp, back-to-school backpack giveaway, fall cleanup day, Thanksgiving turkey drive and Christmas coat giveaway. “The community gives us a lot, so we want to show our support,” said Coach Peters.

Along with giving back, Coach Peters wants to make sure his student-athletes are prepared for their next step in life. He partners with the Bank of the West to provide his players with financial literacy courses. His team learned about saving, budgeting and creating business plans. In addition, he takes all his junior and senior players on a college tour where they can see what life is like at the next level.

Academics come first for Peters, and he made it clear that the kids are students before athletes. He does a top 10 GPA list every year and takes the winners out to dinner. His team finished with 10 kids over a 3.6 GPA, and he mentioned that all seniors are on track to graduate. Peter’s focus is looking out for the kids in his program and preparing them to be productive citizens in society.

For being selected as the Charlie Wedemeyer Memorial Coach of the Year and NFL Don Shula Coach of the Year nominee, Coach Peters and the McClymonds High School football program will receive a grant from the 49ers Foundation! We look forward to him representing the San Francisco 49ers for years to come! Congratulations, Coach Peters!