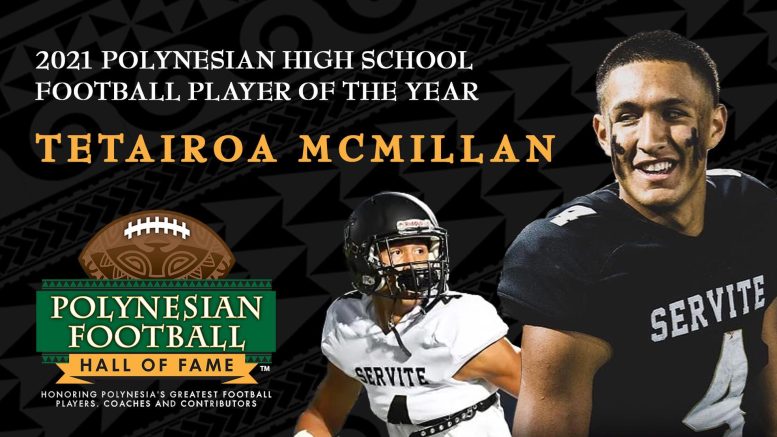 Servite (California) two-way star Tetairoa McMillan is the 2021 Polynesian High School Football Player of the Year. The award is presented by the Polynesian Football Hall of Fame.

The 6-foot-4, 185-pound McMillan is of Hawaiian descent. He was a dominant two-way player at receiver and cornerback/safety this season for Servite, currently ranked No. 6 in the High School Football America 100 national rankings, powered by NFL Play Football.

McMillan, who is an Oregon-recruit, led the Friars with 88 receptions for 1,302 yards with 18 touchdowns. On defense he had 35 tackles with eight interceptions. Two of those picks he returned for touchdowns.

McMillan is also one of the finalists for the Gatorade National Football Player of the Year Award.

The formal presentation of the award will be held at the 2022 Polynesian Football Hall of Fame Celebration Dinner on January 21, 2022. McMillan will also be honored when he plays in the 2022 Polynesian Bowl that will be played the following day in Hawaii.

The Polynesian High School Football Player of the Year Award is presented annually to the most outstanding senior high school football player of Polynesian Ancestry. Current San Francisco 49ers safety Talanoa Hufanga was selected as the inaugural recipient of the award in 2017; BYU wide receiver Puka Nacua and University of Maryland quarterback Taulia Tagovailoa were selected as co-players of the year in 2018; Clemson QB DJ Uiagalelei was chosen in 2019 and Ohio State defensive end J.T. Tuimoloau received the award in 2020.