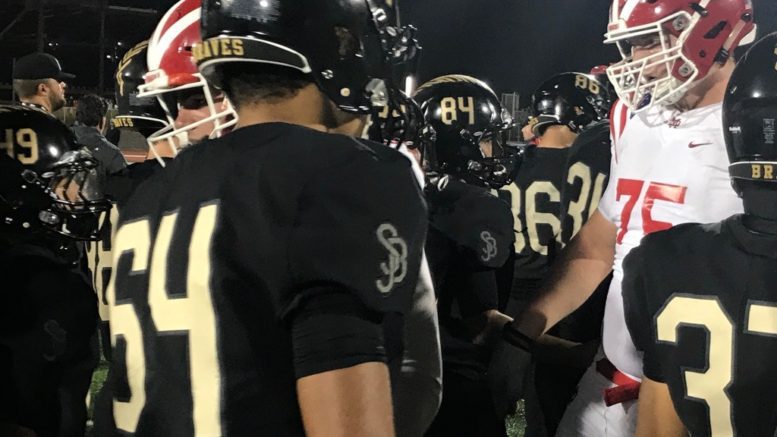 There’s been plenty of shuffling in the High School Football America 100 national rankings, but not at No. 1 and No. 2 where the two teams that started there in the preseason are still there. Tonight, No. 1 Mater Dei, which has won the last two High School Football America “mythical” national championships, hits the road to square-off with No. 2 St. John Bosco in Bellflower, California in what will probably be the first of two matchups between the two Southern California titans.

Over the last three years, the Braves and Monarchs have played twice a year…once during the Trinity League regular season and then once again in the CIF-Southern Section Division I playoffs. Every Part II game came in the CIF divisional championship.

In 2016 and 2018, the team that won the regular season contest, lost the playoff battle. In 2017, Mater Dei won both games on the way to the first of two national titles.

Quite honestly, this hotly-contested rivalry isn’t even ten years old. The genesis of it began when St. John Bosco alum Jason Negro took-over the reigns of the program in 2010. Until that time, nobody would accuse SJB of being a Trinity League power, let alone a national power.

Negro took over a program that hadn’t had a winning season in the Trinity League since 2004. After losing to Mater Dei during his first season, Negro owns an 8-4 record (8-5 overall) against the Monarchs, including six straight wins from 2011 through 2015.

On the other sideline is the legendary Bruce Rollinson, who is still going strong in his 31st season at the helm of his alma mater. Rollinson owns a record of 308-85-2.

I spoke with both coaches before the season on the High School Football America Podcast. You can listen to those interviews below.

Listen to Bruce Rollinson on being Preseason No. 1

Listen to Jason Negro on being Preseason No. 2