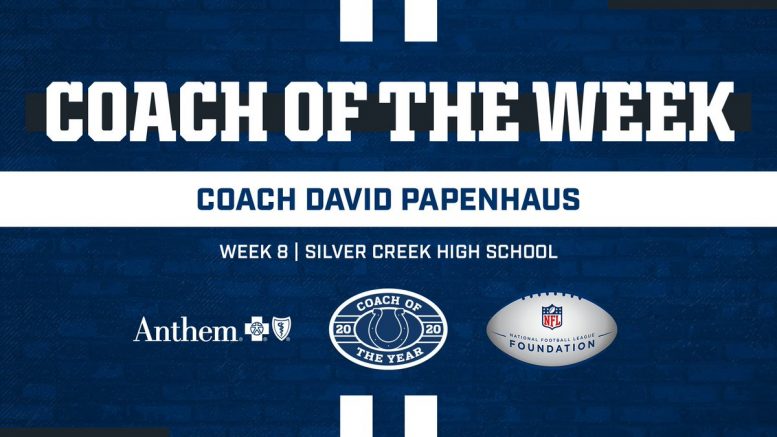 The Indianapolis Colts‘ Week 8 Coach of the Week award winner is David Papenhaus of Silver Creek High School (Sellersburg, Indiana). Papenhaus, in his second season as the school’s head football coach, has led his team to the 2020 Mid-Southern Conference.

Congratulations to Coach David Papenhaus of Silver Creek High School on being named the #Colts Week 8 Coach of the Week! @AnthemBCBS | @NFLFoundation pic.twitter.com/ZG4aeUAOzL

After last week’s 42-14 win over Brownstown Central, which gave the Dragons’ their championship, Coach Papenahaus had the follow to say to the Courier Journal:

“It’s a big deal for the school. Before the game, we talked about how there’s very little things in your life that you get to do something that nobody else has done. They really embraced that thought and played great.”

The following coaches were recognized as honorable mentions for Week 8:

Below is part of the story from Colts.com:

Indianapolis – David Papenhaus of Silver Creek High School has been named the Colts/NFL Coach of the Week, presented by Anthem Blue Cross and Blue Shield, the Indianapolis Colts said today.

Papenhaus was nominated and selected for the award after leading his Dragons to a victory over Class 3A, No. 15-ranked Brownstown Central, 42-14. With the win, the Class 4A, No. 10-ranked Dragons (8-0) earned the school’s first ever Mid-Southern Conference Championship. Silver Creek is celebrating their tenth full season of football in Sellersburg, Ind.