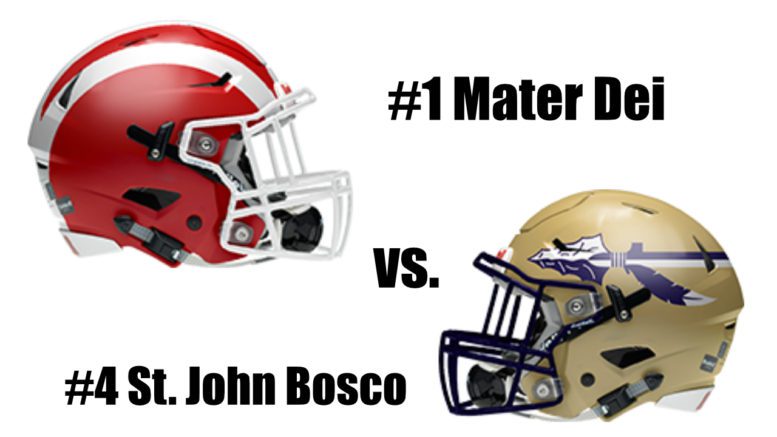 In what’s been a two-part series over the last couple of years, defending national champ Mater Dei takes-on St. John Bosco in a Trinity League showdown in Southern California Friday night in Santa Ana. Both teams are undefeated on the field with Mater Dei entering the contest ranked No. 1 in the High School Football America 100 and the Braves ranked No. 4 nationally. MD’s overall record is 6-1 after having to forfeit its season opening win to Bishop Amat after using an ineligible player.

Expect 10,000 fans to cram into Santa Ana Stadium for this one that features top-level Division I talent all over the field. The winner will likely claim the Trinity League title, which has been captured by Mater Dei over the last two years. Before that, SJB nabbed four straight titles between 2013 and 2016.

Mater Dei has won four straight over the Braves, which includes two regular season wins during 2016 and 2017. After the regular season matchups, the Monarchs also beat the Braves in the CIF Southern Section Division 1 championship games in ’16 and ’17.

What are the keys Friday night?

Look no further than the quarterback position where two top-notch juniors personify the term dual-threat QB.

Bosco’s DJ Uiagalelei is actually considered a Pro-Style recruit, but when he needs to carry the rock, he’s rushed for 7.7 yards per carry with two touchdowns. Uiagalelei, who is considered the No. 5 overall college football prospect in the Class of 2020, has thirty college scholarship offers. He has thrown for 1,570 yards with 23 touchdowns and only two interceptions.

Mater Dei’s Bryce Young, a true dual-threat prospect, is currently the 25th overall prospect in the Class of 2020. The No. 1 overall dual-threat prospect in from the class, who has given his verbal commitment to USC, has thrown for 1,738 yards with 21 touchdowns with only three picks. Young is averaging 8.3 yards per carry with four scores.