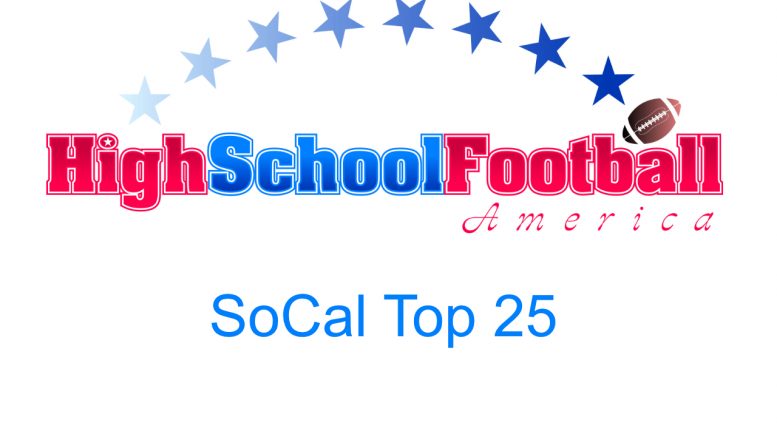 Just like with our national rankings, St. John Bosco and Mater Dei are ranked No. 1 and No. 2 in the High School Football America Preseason Top 25 that is created with our proprietary algorithm.  Both teams are loaded, and if all goes like 2016, the two will meet twice again this season.

Mater Dei snapped Bosco’s run for four straight Trinity League titles in 2016 with a 26-21 defeated of the Braves during the regular season.  In the rematch in the CIF-Southern Section Division 1 championship, Bosco easily handled the Monarchs on the way to a No. 2 overall ranking in our national poll.  Mater Dei finished No. 14 in our national rankings last season.

Offensively, both teams have strong quarterbacks, who possess different skills.  Bosco is led by Iowa State-recruit Re-al Mitchell, who is one of the fastest skill-position players in the nation.  Mater Dei junior quarterback J.T. Daniels, who committed to USC last month, has already thrown 100 touchdown passes in his two years as a varsity starter.

Standing in the wings at No. 3 is Corona Centennial.  The Huskies also have a seasoned quarterback in Tanner McKee.  Head coach Matt Logan’s troops are ranked No. 10 nationally and will find-out if they’ll be ready to be in the “mythical” national championship chase early when they face No. 5 IMG Academy (Florida) on September 2 in a rematch of last year’s exiting last second 50-49 in the Honor Bowl.

Narbonne checks-in at No. 4 in the region and No. 28 in the nation.  The Gauchos will also find-out quickly how good they are, two years removed from a state championship. Narbonne will open the season against No. 7 Serra (Gardena).  Like our top three teams, the Gauchos are led by a future FBS quarterback in Jalen Chatman, who has committed to Rutgers.  Look for USC-recruit Raymond Scott to led the defense after recording over 100 tackles as a junior.

Mission Viejo, which opens the season in Hawaii against Baldwin on Saturday, comes-in at No. 5.  The Diablos have plenty of returning offensive talent led by WR/DB Olaijah Griffin, who is heading to UCLA, and wide receiver Austin Osborne, who’s headed to Washington. Offensive lineman Jarrett Patterson has given his verbal to Arizona.

The big question facing the offense is whether junior Joey Yellen, a transfer from St. John Bosco, can follow in the footsteps of Matt McDonald, now at Boston College and Brock Johnson, now at UC Davis.

Speaking of quarterbacks, No. 6 Long Beach Poly picked-up Oaks Christian transfer Matt Corral, who is considered the No. 3 overall quarterback recruit in the Class of 2018 by 247Sports’ composite rankings.  To go along with Corral, a Florida-commit, the Jackrabbits also picked-up Jalen Hall, the No. 4 overall receiver prospect, who transferred from Hawkins.

The Serra Cavaliers come-in at No. 7 in our SoCal rankings and No. 77 in the national rankings.  The Cavs have talent wide receiver in Kobe Smith and Bryan Addison.  The be question is, can junior quarterback Blaze McKibbin take-over for Jalani Eason, who was just named Portland State’s starting quarterback as a true freshman.

Look for Serra and Chaminade to battle for the Mission League title in ’17.  Chaminade is ranked No. 8 our local rankings and No. 95 in the nation.  The Eagles lost a lot of players, who transferred-out, including star running back T.J. Pledger, now at IMG and quarterback Brevin White at Paraclete, but don’t feel too badly for the Eagles. Ryan Stevens, who split time with White at QB is back.  Running back Andrew Van Buren is as well after rushing for over 500 yards with 11 TDs last year.

No. 9 Rancho Cucamonga made it to the roughed Division 1 semifinals last year, and the quarterback who led them there, Nick Acosta, is back.  Junior Sean Dollars, who had over 400 yards last year becomes the feature back, taking-over Jaylon Redd, who moves to receiver at Oregon.

Rounding-out the Top 10 is Edison.  The Chargers just missed advancing to the state championship game last season.  In Dave White’s final season as head coach, Edison lost to eventual state champ San Clemente 39-35 in the final minute of the southern regional final.  Senior quarterback Griffin O’Connor is back after tossing for more than 3,600 yards last season.

Circle September 29 on your calendar. That’s when Edison will played preseason No. 18 San Clemente in a rematch of last year’s heart-stopper.

Below is our entire Top 25 for the CIF-Southern and LA City Sections.