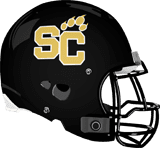 Southern Columbia (16-0) defeated Aliquippa 49-14 Saturday to win Pennsylvania’s Class AA title.  It was the school’s first AA title and seventh overall, which is the most for number of state football titles by any Pennsylvania school.