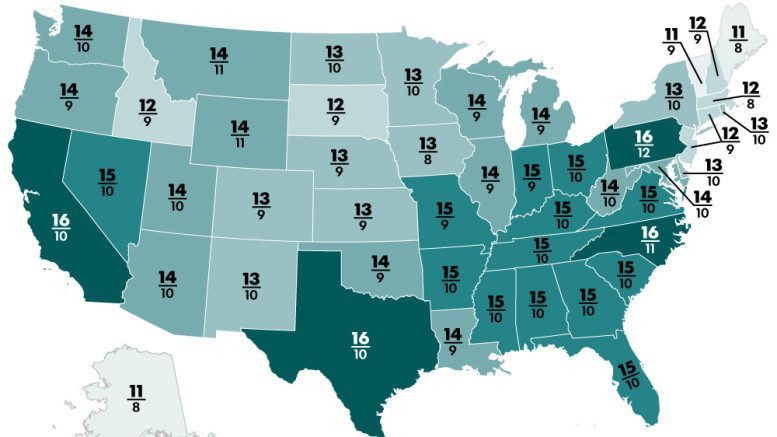 This is the week that Friday night lights and Christmas lights shine simultaneously. High school teams in Texas, California and Pennsylvania will decide state champions Friday and Saturday — a dissonant intersection of holiday season and football season.

The title finalists in these states will be playing in as many as their 16th games. That’s as many as the NFL regular season and more than the 15 games that the finalists vying for major college football’s national championship will play — which is how we arrive at a weekend that blends teens in helmets with partridges in pear trees.

This does not sit well with Robert Cantu, among the nation’s leaders in concussion research and study of the degenerative brain disease CTE. He believes too many high schools are playing too many games.

“It’s insane, is what it is, with what we know,” Cantu tells USA TODAY Sports. “What we know is your chances for head trauma, both concussion and long-term CTE, are increased by exposure.”

There are no national standards for how long a given sports season should be. That’s left up to individual states and 30 of them allow at least 14 football games, including North Carolina, the fourth state that allows 16. Pennsylvania will be cutting back next season, when the max number of games a team can play will be 15.

Leaders of state high school associations in Texas and California say their seasons extend to as many as 16 games because their states are so big.

Roger Blake, executive director of the California Interscholastic Federation, counts 1,576 high schools in his state. The University Interscholastic League in Texas has more than 1,200 football-playing schools and more than 1,400 overall. “The next closest states are about half the size,” Blake says, “so our states have to be a little different.”

Jamey Harrison, deputy director of the UIL, says a medical advisory board analyzes health and safety issues and has offered no recommendation to cut back on games. “Our constituencies and our members are comfortable and pleased with the system we have,” he says, though “given the current climate related to health and safety, we would listen to anyone with those concerns.”

Cantu has concerns. He says exposure in the NFL is lessened by allowing 14 full-contact practices during 18 weeks of the season with no contact in the offseason: “That’s not happening in college, high school and youth football. They have more full hitting in practice than the pros do. The trauma that youngsters are taking are two to three times higher than the pros, for God’s sake.”

Blake says he knows and respects Cantu and thinks it is critically important for the leaders of school sports to listen to experts in sports medicine.

Cantu is working on it. He is medical director of the National Center for Catastrophic Sports Injury Research at the University of North Carolina and co-founder of the Concussion Legacy Foundation, which is striving to develop a so-called hit count.

Can’t eliminate risk but can lessen it

“The way these kids are training nowadays, they’re preparing themselves for a 16-game season,” he says. “They want to win a state championship. And if it takes 16 games, they’ll train their bodies to last all 16 games.”

Bret Johnson is associate coach and offensive coordinator of Mission Viejo, which will play its 16th game in California’s Division I-AA state title game on Friday. He thinks 16 games is two or three too many.

“You’re taking about 400 more snaps,” Johnson says. “The bodies are starting to get worn down. There are a lot of games for the starters. Every team has players who go both ways. That doesn’t happen in college or pros.”

Johnson figures you can’t eliminate risk, but you can lessen it. “I don’t want to bubble-wrap children,” he says, pointing out kids can suffer concussions at the beach and cheerleaders can get them doing routines.

“I’m happy we’re playing in (the title game) because that’s what’s presented to us,” he says. “I’m not complaining and we’re excited to go do it. Do I wish the first two rounds of playoffs were not included and this were Game 14? Heck yes. … I would love to give you the perfect number, but the perfect number can start with eliminating those first two rounds,” where the mismatches often are.

“Drawing money drives college football and pro football and it drives high school football,” says Erik Richards, national scouting director for the U.S. Army All-American Game. “A lot of these high schools could use the money from the gate. It goes a long way to being able to help your Title IX sports and baseball teams and girls lacrosse and uniforms. I don’t think you’ll see a change to it.”

Harrison of Texas’ UIL says cash is not a consideration. “That conversation comes up,” he says, “but it has no impact on the ultimate policy decision, which is what the member schools want and what the medical advisory committee tells us.”

It’s not the games, it’s the hitting

The number of state title games in California expanded from six to 13 this season. Schools that go to title games will be playing in their 14th, 15th or 16th games, says the CIF’s Blake.

“From 2006 until last year we had 52 sectional champions,” he says, with room for only 20 in the so-called bowl championships. “Those 32 who weren’t selected, they were asking — and rightfully so — ‘Why didn’t my school get selected?’ ”

Schools voted to expand the playoffs. The result: More teams playing more games. But, Blake reminds, the number of kids playing those games starts small and halves itself weekly, by the Darwinian nature of playoffs.

Of roughly 104,000 who play high school football in California, about 6,400 players, or 6%, played two weeks ago. That number dropped to 3,400 kids, or 3.1%, last week — and will be about 1,800 kids this weekend, or 1.6%. That’s all according to Blake, who adds that about 400 to 500 kids played on the last weekend last year, before expanded playoffs. He figures it is all a balancing act between providing championship opportunities and safety.

“It’s not about the number of games,” Blake says, “it’s about the full-contact hitting that goes on during the season.”

That’s why, he says, California cut back the number of hours that teams can practice to 18 last season and cut back as well on how much contact is allowed in practice. Blake credits Texas for taking the lead on that.

“We were one of the first states to adopt recommendations that mirror USA Football — 90 minutes per week in-season of full contact,” Harrison says. “There are no limitations on full contact in the preseason.”

Richards, longtime president of the Gwinnett Football League, among Georgia’s top high school leagues, thinks that “the thing that’s more concerning than a 15-, 16-game schedule is spring contact football. It’s absolutely ludicrous. Places like Arizona, Texas, Florida, those states need to look themselves in the eye and ask what we are doing here.”

Cantu seconds that emotion. “The pros don’t hit in the spring,” he says. “All of that is just absolutely courting brain trauma that is cumulative and, unfortunately for some of these kids, will have a deleterious effect.”

Texas is taking steps, even if bureaucratically small ones, to cut back on spring football practice, which is allowed in the two largest classifications. The UIL’s medical advisory committee voted in October to reduce spring training from 18 days in a 30-day period to 15, a recommendation that will be considered by a legislative standing committee in June.

Survival of the fittest

Nearly every team in Kentucky makes the playoffs and it takes as many as 15 games to win a state title.

“We’ve gotten used to it,” says Male (Louisville) coach Chris Wolfe, whose team finished 15-0, its first undefeated season in more than 50 years. “It’s the only way a 32-team bracket can work. As far as injuries, we went through some injuries this year. It’s just part of the deal, I guess. I don’t think there’s any way around that.”

“Playing that many games really shows who the best team in the state is,” says Chase Parrish, quarterback at Colquitt County (Georgia), which finished back-to-back 15-0 seasons to repeat as the AAAAAA state champs.

Jake Allen is quarterback at St. Thomas Aquinas (Fort Lauderdale), which went 13-1 to repeat as Florida 7A champion. “It’s definitely a long season,” he says, “but our coaches prepared us” with summer workouts and weight training. “But obviously the more you play, the more susceptible you are to injury.”

Jim Morgans is coach of Parkland (Allentown, Pa.), which will play its 16th game in Saturday’s PIAA 4A state final. “I’ve never had a problem with the length of the season,” he says — and he is in his 40th season as a head coach. He does note that he’s “glad” that Pennsylvania will be cutting back by a week with new classifications next season.

Chuck Petersen, coach of Orange Lutheran (Calif.), feels conflicted about all of this.

“There is part of me (the fan) that loves the current format that we use,” he says by email. “I think the more our game is exposed, the more interest is generated and the game has the potential to grow. There is another big part of me (coach, dad and football loyalist) that does not like our current format. …

“I don’t believe it is in the best interest of a high school age boy to play 15 or 16 games in one season. We have limited the amount of contact during practice weeks, but have extended the season which extends contact. I don’t think that makes much sense.”

He figures, in this case, less is more.

“Football has been my livelihood for 28 years and most of the lessons I have learned in life have come from football,” he says. “I want to do everything I can to preserve it, so that others can say the same.”