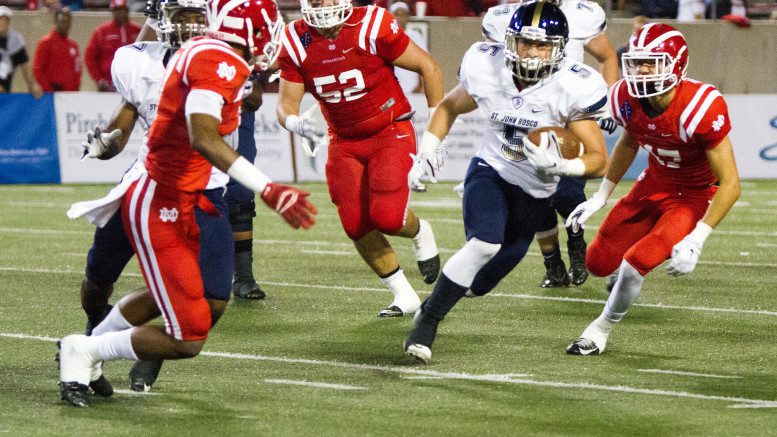 When you meet St. John Bosco‘s (Bellflower, California) Sean McGrew in street clothes, you might question whether the 5-8, 174 pound running back is big enough to play running back in one of America’s toughest high school football leagues.  But, looks don’t make a high school football player.  Over the last three years, not only was the University of Washington commit big enough to play in the Trinity League, but he put-up big numbers while helping his school to a record-setting 21 game league win streak with three consecutive league titles.

“Sean McGrew is easily one of the most impressive student-athletes that I have encountered during my career as a high school football coach,” said St. John Bosco head football coach Jason Negro. “He is the most complete and competitive football player in our highly successful program. Sean has excelled brilliantly over the past four seasons playing one of the most difficult schedules in high school football.”

Not only does McGrew leave St. John Bosco unbeaten as a Trinity League performer, but he also left the field with twelve school records.  He was named All-Trinity League as a sophomore, junior and senior.

This past season, McGrew was named first team all-state by CalHiSSports.com after rushing for more than 1,800 yards and 27 touchdowns while leading his team to a 13-1 record, finishing #8 in the nation in the High School Football America top 25.  McGrew’s senior stats may have been bigger, except for the fact that he sat out the second half of several games because Bosco had commanding leads at halftime.

McGrew’s athletic talent isn’t limited to the gridiron.  As a junior, McGrew won a silver medal in the 100 meter dash at the California Track and Field Championships.

As a youngster, McGrew was a very good baseball player, who played on a travel squad that won several national tournaments around America.  He also raced motocross for several years, starting at the age of five.

The NHSCA has been honoring senior athletes in 20 boys’ and girls’ sports since 2000.  Below is the list of past winners of the NHSCA Senior National High School Football Player of the Year Award.