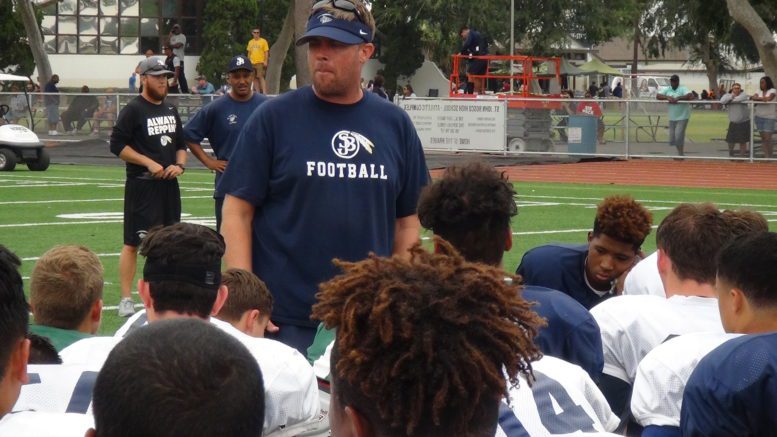 Friday night’s battle between Trinity League heavyweights Mater Dei and St. John Bosco has a lot riding on the outcome.  First, there’s the Trinity League championship.  The winner will emerge as the only undefeated team left in the six-team league with two weekends of football left.  Barring an upset in the final two weeks, the winner should also emerge as the higher-seeded team in the upcoming CIF Southern Section Division I playoffs.  And, then there’s the national rankings, which heading into the game find Mater Dei ranked #3 in the latest High School Football America Top 25 and St. John Bosco ranked #6.

“Mater Dei provides a tremendous challenge,” said Bosco head coach Jason Negro.  “The whole idea of being able to game plan for somebody that is as talented as Mater Dei, and coached as well as Mater Dei is, is great for our staff, our kids and our whole school community.  Honestly, this is one of the reasons why we coach at a school like Bosco, because it gives us an opportunity to play in games like this.”

SJB has shown great balance offensively (1,955 rushing, 1,426 passing) with junior quarterback Re-al Mitchell improving with each-and-every game.  Mitchell has completed over 65-percent of his passes for 1,286 yards and 13 touchdowns with three interceptions.  Mitchell, who is also a sprinter on the Braves’ track team, has also rushed for 457 yards and eight TDs.

“Re-al has shown in our first seven games that he’s able to throw as well as anybody in the country,” said Negro.  “He’s displayed the accuracy and the ability to get the ball down the field whether it’s been in the short passing game, intermediate or even down the field.”

Negro added, “Our biggest growth this year has been on the offensive side of things.  I think a lot of people were wondering how we’d run the ball without Sean McGrew (now at Washington) and Terrence Beasley (590 yards, 4 TDs), Demetrious Flowers (458 yards, 9 TDs) and George Holani (250 yards, 1 TD), along Re-al have done a great job. And, I actually believe we’re producing better on the ground than we have in the past.”

The big question heading into the game is how the Bosco defense can contain Mater Dei super sophomore quarterback J.T. Daniels, who enters the game having completed over 80-percent of his passes with 40 touchdowns with only two interceptions.  Last week in the Monarchs win over Orange Lutheran, Daniels broke the school’s single-season record for touchdown passes.

“They’re really skilled at pass protection and J.T. is an extremely accurate passer with incredible playmakers around him,” said Negro. “He’s got great arm strength and throws some really difficult balls.  We have to limit the big plays, so we’ll give him some different looks and hopefully slow them down a little.”

Negro and his staff is hoping to use the road map from last season that saw Bosco jumped-out to an early 42-0 lead on the Monarchs, and never looked back in a 42-21 victory.

Negro says he please with the way his team has bounced-back from a disappointed loss to Bishop Gorman (Nevada) on September 9th.  The Braves owned a 20-7 lead in the first half, before losing 35-20 to the Gaels, who are the consensus #1 team in the nation.