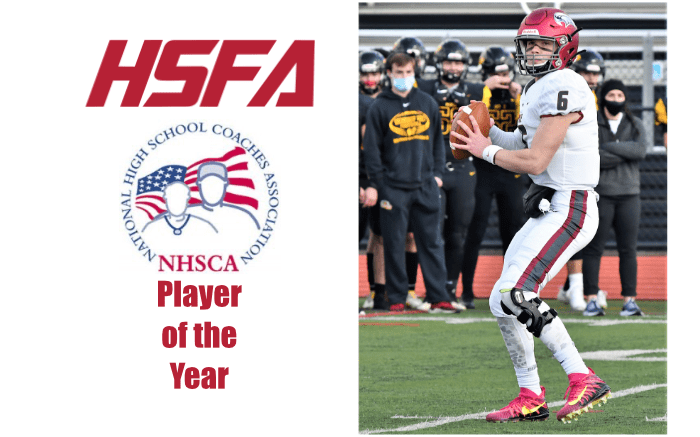 In a state that has turned-out Hall of Fame quarterbacks like Joe Montana, Joe Namath, Dan Marino and Jim Kelly, this year’s High School Football America/National High School Coaches Association Player of the Year Kyle McCord of St. Joseph’s Prep has something that none of Hall of Famers have…a high school football state championship ring. McCord owns three rings, but we should point out that Pennsylvania didn’t hold state championships during Montana, Namath, Marino and Kelly’s high school careers.

Last fall, McCord led St. Joseph’s Prep to its third straight Pennsylvania 6A state championship with a 62-13 win over Central York. In his final game as a high school quarterback, McCord was 21-for-28 with 336-yards and four touchdowns. If it weren’t for an injury near the end of his junior season, McCord would have been the starter in all three of the Hawks’ state championship game.

St. Joe’s head coach Tim Roken said this about his QB, “When you turn on the film going back even to his sophomore year, it doesn’t lie. Kyle’s ability to hurt you as a defense in rhythm, under pressure or outside the pocket is special! I believe what separates Kyle though is his mindset and his leadership. Always calm, cool, collected regardless of the noise! His mental and physical preparation is why you see him play with so much confidence and command of the offense . Kyle is about the day to day not just game day and with that put a stamp on an amazing career here at the Prep. Very happy for him to receive this honor!”

McCord is the fourth Pennsylvania high school football player, and second in a row, to win the award, which has been won by future Heisman Trophy winners Kyler Murray (Allen HS, Texas in 2015), Derrick Henry (Yulee HS, Florida in 2013) and Johnny Manziel (Kerrville Tivy HS, Texas in 2011). Last year, current Ohio State wide receiver Julian Fleming of Southern Columbia won the award. The other Pennsylvania winners are Terrelle Pryor of Jeannette High School for the 2007 high school football season and Austin Scott of Parkland High School for the 2002-03 sports season.