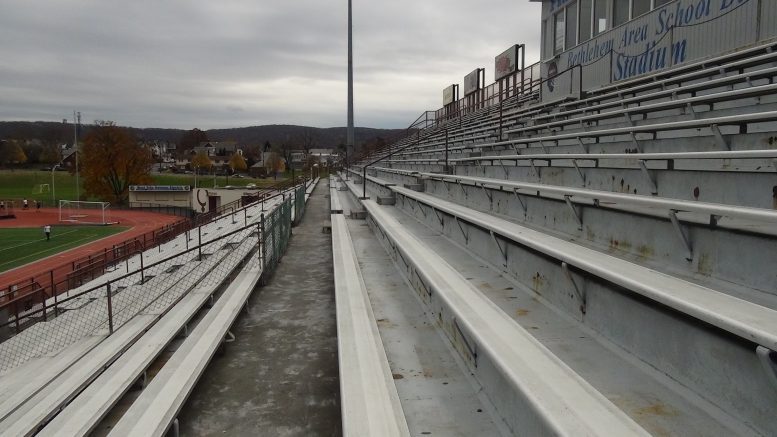 Bethlehem Area School District Stadium on Elizabeth Avenue in Bethlehem is one of the best football high school football facilities in the state of Pennsylvania.

Known to locals as BASD, the stadium was built in 1939 on the campus of what was then Bethlehem High School with funds from the Works Progress Administration that was established during the Great Depression by President Roosevelt as part of his social and economic programs known as the New Deal. According to a 1994 newspaper report, the stadium was built for over $128,000.  The all-steel structure was built at the same location as the school’s old field that had wooden bleachers on both sides.

In 1967, Bethlehem High was split into two schools — Freedom and Liberty.  BASD is located on the campus of Liberty and serves as the home field for both schools, plus nearby Bethlehem Catholic High School.

One of the cool facts about grandstands is they were built with steel from Bethlehem Steel, which no longer exists, but is best-known as the company that built landmarks such as the Golden Gate Bridge, Madison Square Garden and the Hoover Dam.

The first home game at Bethlehem Area School District Stadium was played on September 23, 1939 between Bethlehem and Northampton.

BASD seats about 14,000 fans now, but its original seating capacity was above 16,000 because of seating in the two end zones.  It is believed that in 1945, 22,000 fans watched the Thanksgiving Day game between Bethlehem and Allentown high schools.

The stadium was renovated in 2005 with new lights and a new turf field with funds provided by Frank Banko.  Currently the field is name after Banko, which makes the stadium’s official name — Frank Banko Field at BASD.