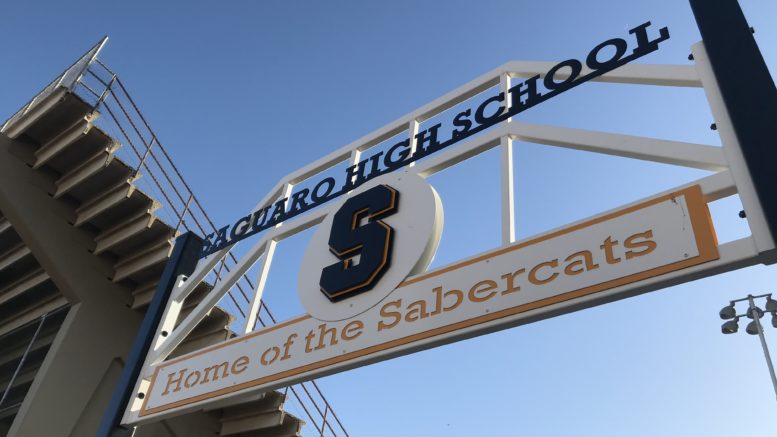 Eight days ago, Trish Hoffman and I set out on our 2018 High School Football America road trip. The first leg of the trip takes us from Laguna Beach, California to Atlanta, Georgia. Along the way, I took multiple detours to snap photos for our Stadium Project.

Our first stop was in Phoenix, Arizona to hang-out with our friends Kevin and Molly Lewis, whose son Parker Lewis writes a blog for us. Parker is one of the top kickers/punters in the Class of 2020. He plays for Saguaro High School, which enters 2018 as one of the top teams in the nation.

The Sabercats will be going after their sixth straight state championship this year. Look for Saguaro to be highly-ranked when we release our Preseason Top 100 on July 1st. Last year, the Cats, led by head coach Jason Mohns, finished No. 68 in our national rankings that are created with our proprietary algorithm.

When I was in Phoenix, I headed to Scottsdale to check-out Saguaro’s spring game that included Coach Mohns handling the play-by-play duties from the home stands.

Gotta luv @CoachMohns doing PBP for @saguarofootball spring game. Look for Saguaro to be highly-ranked in our Preseason Top 100 this will be released in early July. pic.twitter.com/WmRWV1kLyA

Below you can check-out the pics that I added to our Stadium Project.